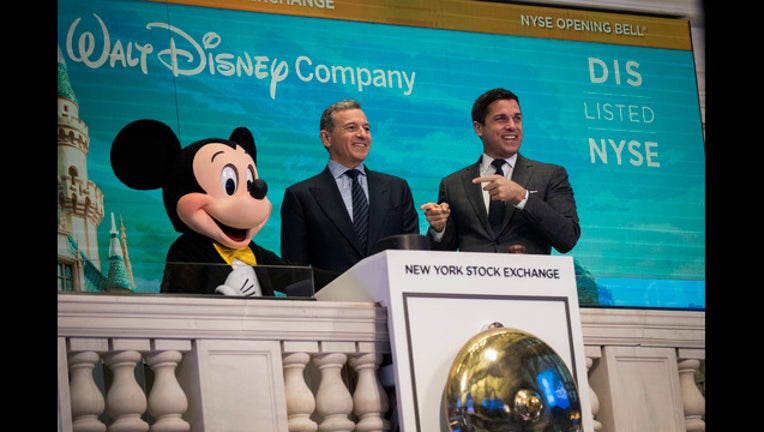 NEW YORK (AP) - Disney is buying a large part of the Murdoch family's 21st Century Fox for about $52.4 billion in stock, including film and television studios and cable and international TV businesses, as it tries to meet competition from technology companies in the entertainment business.

The deal gives Disney film businesses including Twentieth Century Fox, Fox Searchlight Pictures and Fox 2000, which together are the homes of Avatar, X-Men, Fantastic Four and Deadpool. On the television side, Disney will get Twentieth Century Fox Television, FX Productions and Fox21, with shows including "The Simpsons" and "Modern Family."

21st Century Fox shareholders will receive 0.2745 Disney shares for each share they own. The transaction also includes approximately $13.7 billion in debt.

"You may be wondering how we came to this momentous decision," Fox News Chairman Rupert Murdoch told employees in an email Thursday morning. " And the answer is simple – we’ve always made a commitment to deliver more choices for customers; provide great storytelling, news, challenging opinion and compelling sports."

Not included in the acquisition: Fox News, the Fox broadcast network and the FS1 sports cable channel. Murdoch explained in an email that the transaction means there will be a "new Fox" and a combined Disney and Fox. 21st Century is also the parent company of KTVU.

"Our sports, news and broadcast businesses will form the new Fox, a growth company centered on live news and sports brands and the strength of the Fox Network.  The new Fox will be created through a spin-off of Fox Broadcasting, Fox News, Fox Business, FS1 and FS2, Big Ten Network (BTN) and our stations group," the email said.

Robert Iger will continue as chairman and CEO of The Walt Disney Co. through the end of 2021.

Disney said Thursday that it anticipates the acquisition providing at least $2 billion in cost savings.

Both companies' boards have approved the deal. It still needs approval from Disney and 21st Century Fox shareholders.

Before the buyout, 21st Century Fox will separate the Fox Broadcasting network and stations, Fox News Channel, Fox Business Network, FS1, FS2 and Big Ten Network into a newly listed company that will be spun off to its shareholders. It will also include the company's studio lot in Los Angeles and equity investment in Roku.

That Murdoch and his sons were willing to sell off much of the business that has been built up over decades came as a shock to the entertainment industry.

The entertainment business is going through big changes. TV doesn't have a monopoly on home entertainment anymore. There's Netflix, which is spending up to $8 billion on programming next year. Amazon is building its own library, having splashed out on global TV rights to "Lord of the Rings." Facebook, Google and Apple are also investing in video.

As consumers spend more time online, TV's share of U.S. ad spending is shrinking. Advertisers are following consumer attention to the internet, where Google and Facebook win the vast majority of advertisers' dollars.

"We've been talking about cord cutting for the better part of a decade. But now it's real," USC Annenberg communications professor Chris Smith said. The media companies have to compete with the internet giants for consumers' attention - and the younger generations pay more attention to YouTube, Facebook and other "platforms" than traditional TV, Smith said.

To combat this trend, Disney is launching new ESPN- and Disney-branded streaming services over the next couple of years. It could beef them up with some of the assets it's acquiring from Fox, making them exclusive to its services and sharpening its ability to compete with Netflix for consumer dollars. During a conference call with investors, Disney CEO Bob Iger said many Fox properties will fit with the new service, including possibly National Geographic and additional Marvel productions.

"The core underlying driver for this deal in our opinion is the impending battle royale for content and streaming services vs. the Netflix machine," GBH analyst Daniel Ives wrote.

Not everyone thinks this is a good bet by Disney, though. Rich Greenfield, a longtime Disney critic, thinks the deal is a bad idea that ties Disney to older TV-distribution systems - cable and satellite TV - rather than helping it look toward the future.

He also notes that regulators may not like the idea of combining two major movie studios. The Justice Department surprised many in the industry and on Wall Street when it sued to block another media megamerger, AT&T's acquisition of Time Warner, in November.

Rupert Murdoch built 21st Century Fox and News Corp. out of an inheritance from his father in Australia. He bought a string of papers there, in the U.K. and the U.S., building an influential platform for his views. He expanded into TV and movies, launching the Fox network and Fox News and changing the face of American news and entertainment.

"Rupert has spent many, many years assembling the components of his empire," said NYU business professor Samuel Craig, who specializes in the entertainment industry.

Rupert Murdoch has ostensibly already handed the reins over to a new generation at Fox. His son James is CEO, while his other son, Lachlan, like Rupert, has the title of executive chairman.

The Murdoch empire has already been divided. After a phone-hacking newspaper scandal in the U.K., News Corp. was split off into a separate company for the publishing and newspaper businesses, which include the New York Post, The Wall Street Journal, The Sun and The Times in the U.K., and book publisher HarperCollins. Now Fox is also being split up as the company sets itself up to deal with the growing power of the tech industry.

It would be harder to launch a Fox-branded streaming service that attracts lots of the new generation of consumers, for example. Smith said that makes it a great time to sell off the entertainment business.

Fox is also selling to Disney its substantial overseas operations. It is offloading its 39 percent stake in European satellite-TV and broadcaster Sky after running into regulatory roadblocks in the U.K. trying to take over the rest of the company, in part because of how Fox handled the sexual harassment scandal at Fox News. Disney is also acquiring Star India, a major media company with dozens of sports and entertainment channels.

Fox will be left with the live events, news and sports, that are key parts of the traditional TV bundle. There is speculation that the Murdochs would want to recombine what's the slimmed-down Fox with News Corp.

The Disney-branded service, expected in 2019, will have classic and upcoming movies from the studio, shows from Disney Channel, and the "Star Wars" and Marvel movies.

Disney will also win majority control of Hulu, both its live-TV service and the older service with a big library of TV shows.

Disney could continue to add movies and TV shows from Fox's library to its services, making them more attractive compared with Netflix's offerings. The combined libraries of the Disney and Fox movie and TV studios could have more titles than Netflix, Barclays analyst Kannan Venkateshwar said. Buying Fox's FX networks will add edgy TV shows that complement Disney's long list of kid-friendly series and films, he said.

Greenfield, however, notes that a lot of programming wouldn't be immediately available to Disney. Fox movies are exclusive to HBO through 2022, for example.

Disney also plans an ESPN Plus service for next year. It isn't a duplicate of the ESPN TV network, but it will stream tennis matches along with major-league baseball, hockey and soccer games, as well as college sports. It might be able to add more sports through Fox's 22 local sports networks - cable channels that show popular sports in the viewer's region.

Disney also owns Marvel, but not all the Marvel characters. It's made movies starring Thor, Doctor Strange and Captain America and the Avengers crew. But the X-Men are at Fox. Bringing them home under one roof could mean movies with more of the characters together.