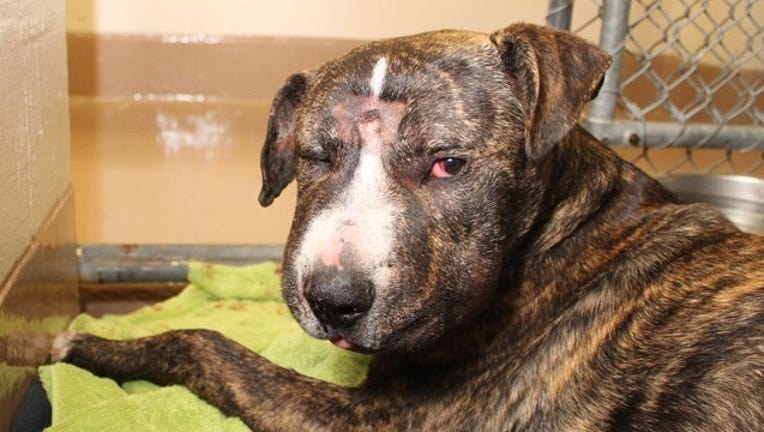 SAN FRANCISCO (KTVU and wires) – A dog that was found severely injured Thursday morning in San Francisco's South of Market Neighborhood was euthanized Sunday due to kidney failure.

According to San Francisco Animal Care and Control, the dog, named Maximilian by shelter employees, endured so much abuse that his body was not able to recover despite a veterinarian's efforts.

Officers were able to find Maximilian's owner. They learned the young, male, pit bull terrier mix had been stolen from him early last week.

According to Animal Care and Control, the owner loved his dog and was horrified to hear what happened. He was able to be with the dog when it was euthanized.

The dog had been found at about 6 a.m. Thursday below the U.S. Highway 101 overpass near South Van Ness Avenue suffering from serious injuries, according to the city's Department of Animal Care and Control.

Maximilian injuries included blunt force trauma to his head and body, broken and missing teeth, severely injured paws with missing pads and nails and burns from heat sources including cigarettes.

Animal Care and Control is now offering a $500 reward for information leading to the arrest and conviction of whoever is responsible for Maximilian's abuse.

Virginia Donohue, Animal Care and Control's executive director said they, "need the public's help to find the person who abused him so we can hold him or her accountable and make sure another animal does not suffer."

Anyone with information that could help investigators is encouraged to call Animal Care and Control at (415) 554-9400. Callers may remain anonymous.