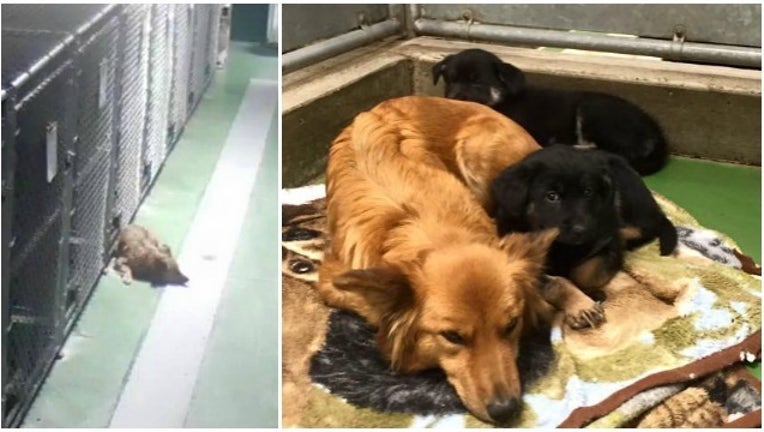 This could easily be the sweetest story you come across all week! A Canadian pet motel shared two touching photos on Facebook last month of a dog sneaking out to comfort two frightened puppies, but the story behind the photos will really melt your heart.

“Last night our newest foster puppies arrived from Alberta Animal Rescue Crew Society (AARCS),” Barkers Pet Motel and Grooming said. “Also staying with us right now is a dog who was recently adopted from the Humane Society who had her own puppies taken away about 2 weeks ago.”

Barkers pet motel said the mama dog, “Maggie,” likely heard the puppies crying and let herself out of her kennel to lie next to their room. Employees figured this out after watching surveillance video, so they decided to let the dogs spend some time together.

“We put them together for a while and all 3 of them were so happy.”

Maggie’s puppies were all adopted out of the Humane Society shortly before she found a forever home and the pet motel thinks that’s why she was so attached to the crying pups, “Kari and Hannah.”

"Kari and Hannah were weaned from their mother at a previous AARCS foster home. It just so happened they were both staying with us at the same time," said Barkers, which is a boarding kennel that fosters for rescues when needed.

“Maggie the mother has a loving home and the puppies are waiting to find their forever homes,” Barkers said.

However, the two puppies features in the photo both now have pending adoptions.