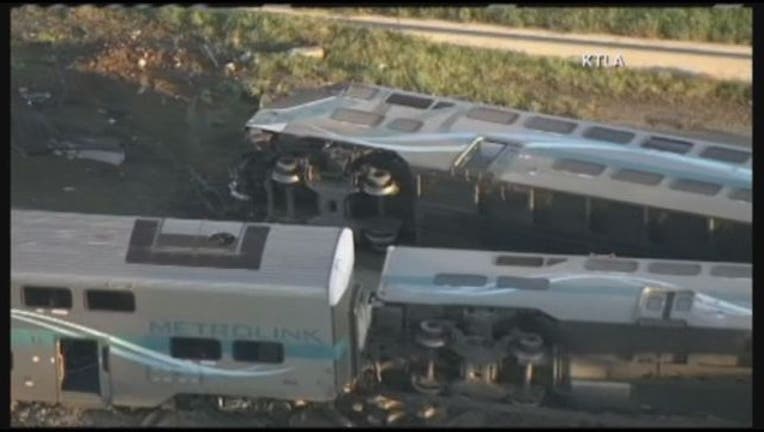 OXNARD, Calif. (AP) — A commuter train bound for Los Angeles derailed before dawn Tuesday in a fiery collision with an abandoned commercial pickup after the truck's driver took a wrong turn and got stuck on the tracks.

There was a loud boom and the screech of brakes before three of the train's five cars toppled over, sending 30 people to hospitals. Four were in critical condition, including the engineer.

"It seemed like an eternity while we were flying around the train. Everything was flying," said passenger Joel Bingham. "A brush of death definitely came over me."

Lives were likely saved by passenger cars designed to absorb a crash. They were purchased after a deadly collision a decade ago, Metrolink officials said. The four passenger cars remained largely intact, as did the locomotive.

Police found the disoriented driver of the demolished Ford F-450 pickup 1.6 miles from the crossing 45 minutes after the crash, said Jason Benites, an assistant chief of the Oxnard Police Department.

Sanchez-Ramirez, who delivers produce, was driving a pickup with an empty bed pulling a trailer with some welding equipment in it. He told police he tried to turn right at an intersection but turned prematurely and his truck got stuck straddling the rails.

Police said they tested Sanchez-Ramirez for drugs and alcohol but they would not discuss the results.

The crossing where the crash happened has been the scene of many collisions over the years.

The train, the first of the morning on the Ventura route, had just left its second stop of Oxnard on its way to downtown Los Angeles, about 65 miles away, when it struck the truck around 5:45 a.m. There were 48 passengers aboard and three crew members who were all injured.

Bingham said the lights went out when the train fell over. He was banged up from head to toe but managed to find an escape for himself and others, many of whom had been asleep when the crash happened.

"I was just shaking," he said. "I opened the window and told everybody, 'Come to my voice.'"

Firefighters set up red, yellow and green tarps to categorize people according to their injuries, taking 28 to hospitals by ambulance. Two of the 22 people treated at the scene later showed up at hospitals, but only eight people had been admitted by the end of the day.

"Patients have complained of dizziness, of headaches, of lower back pain, of pains related to being bumped, thrown, hit and so forth," said Dr. Bryan Wong, chief medical officer at Ventura County Medical Center.

One patient described how he had been working on his laptop and a moment later there was a sudden jerking motion that happened so quickly he wasn't able to grab hold of anything, Wong said. He was violently tossed against a wall of the train.

The train typically would be accelerating out of the Oxnard station past verdant farm fields at about 55 mph, Metrolink spokesman Scott Johnson said. With braking, he estimated it would have hit the truck at between 40 mph and 55 mph.

The train was pushed by a locomotive in the rear, allowing trains to change direction after their run without having to turn around or swap engines. It's a configuration that has been criticized for putting passengers in a vulnerable position in a crash.

After such a crash killed 11 people and injured 180 others in Glendale in 2005, Metrolink invested heavily to buy passenger cars with collapsible bumpers and other features to absorb impact.

"Safe to say it would have been much worse without it," he said.

The city of Oxnard has wanted to build a $30 million bridge over the crossing for 10 years, but is only at the environmental review stage, said Darren Kettle, executive director of the Ventura County Transportation Commission.

There have been six accidents at the crossing in the past seven years, including one in which a driver accidently turned onto the tracks in 2010 and was struck by a Metrolink train and injured, according to federal railroad accident reports. Two people were killed at the crossing last year when a car struck an Amtraktrain.

Sanchez-Ramirez, the driver in Tuesday's crash, told police he turned onto the tracks before the crossing arm came down, which occurs 29 seconds before atrain arrives. It wasn't clear how long his truck was stuck before the train hit it.

The accident happened on the same line as Metrolink's worst disaster when 25 people were killed Sept. 12, 2008. A commuter train engineer was texting and ran a red light, striking a Union Pacific freight train head-on in the San Fernando Valley community of Chatsworth. More than 100 people were hurt in what was one of the worst railroad accidents in U.S. history.

The National Transportation Safety Board and the Federal Railroad Administration were sending investigators to the Tuesday crash in Oxnard.

Cranes moved the trains at the end of the day, but the tracks, which are also used by Amtrak and freight trains, remained shut down.