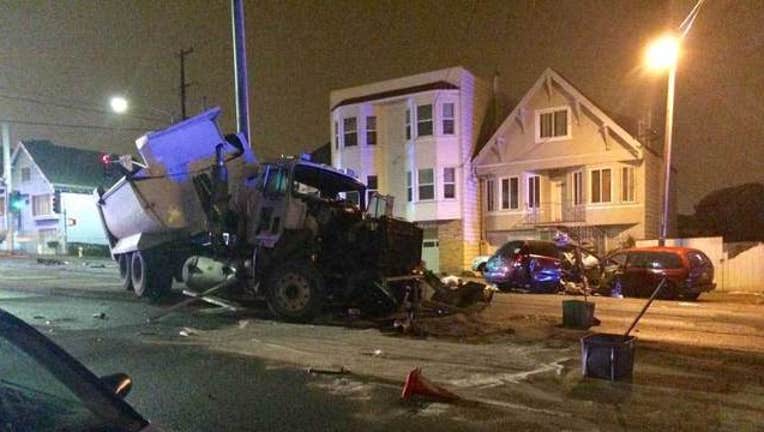 DALY CITY, Calif. (KTVU) - Three people were injured after a man driving a stolen dump-truck crashed into their minivan while involved in a chase with police.

That chase started just after midnight Thursday near the Costco in Colma. Police say a officer noticed the dump-truck and thought it seemed suspicious, when he ran the plates he discovered that the truck had been reported stolen out of San Francisco. When the officer attempted to pull the dump-truck over, the driver took off.

The officer chased the suspect for miles, through South San Francisco and into Daly City.

The driver of the stolen dump-truck crashed into the minivan, injuring the adult female driver and a 16 and 20-year-old passenger. All three were taken to SF General with minor to serious injuries.

The impact of the crash caused diesel fuel from the dump-truck to spill all over the roadway.

After the crash, the driver tried to evade officers but was caught trying to jump over a fence.

Investigators say Flournoy at San Jose will be shut down until at least 8 a.m. Thursday because of the diesel spill.