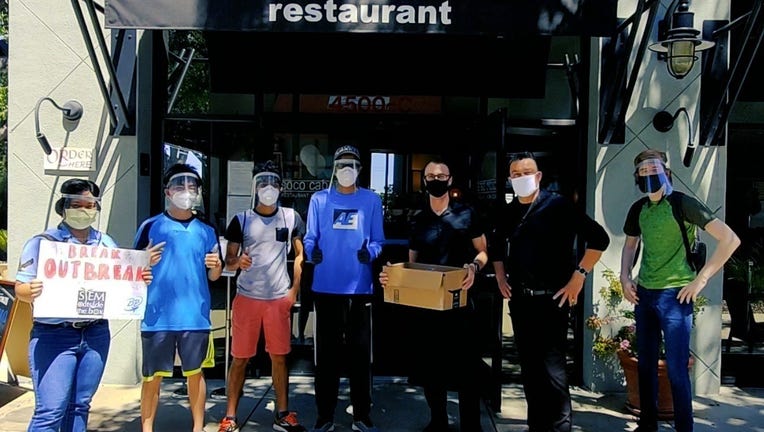 Members of Break the Outbreak Dublin chapter — which was founded by Dublin High School senior Sky Yang (second from left) — drop off vital PPE at the Coco Cabana restaurant.

Sky Yang, a 17-year-old senior at Dublin High School, started the student-run nonprofit Break the Outbreak (BTO) in April in response to the nationwide shortage of PPE.

"When I heard on Nextdoor that restaurants and grocery stores do not have proper PPE while the virus was gaining traction, I felt that as a member of society I should give back to society," he said. "It's very important for us to do the best we can to flatten the curve."

BTO focuses on providing restaurants, food banks and other local service centers with free PPE. So far, the group has donated more than 1,500 face masks and protective face shields to nonprofits and such businesses as The Veg Hub, Banana Garden and Jamba Juice.

The group's GoFundMe campaign, where BTO raises most of its funds, has accumulated more than $2,000 in donations. And most PPE it donates is handmade by trained team members, which keeps costs low and maximizes PPE donations.

"[BTO's] emergency support keeps our seniors and caregivers safe and it's a meaningful gift," said John V. Blazek, chief development officer at On Lok Lifeways, a local senior care facility, which received 85 masks and shields from BTO's San Jose Chapter in July. "We really appreciate it."

Another thankful mask recipient is Gale Gifford, 94, a World War II veteran and Dublin resident. Gifford explained that since his neighbors visit him often the masks are simple but crucial items to have around. BTO began as a website where people could post requests for help.

"I realized that there was no centralized platform for people to reach out for help; everyone was posting on Reddit, Facebook, everywhere," Yang recalled.

After realizing that he could help more people in the community if he expanded his operations, Yang enlisted a few friends in Dublin and started the first BTO chapter there. BTO soon expanded to include chapters in San Ramon and Livermore. Now there are 28 BTO chapters in 13 states.

Adithya Krishnaraj, co-director of the San Ramon chapter and a senior at Dougherty Valley High School, said BTO is working to improve its process every day in order to serve the community effectively. An example is the way the group overcame early difficulties in creating quality face masks.

"We had to ask our members, 'Would you use this mask yourself?'" Krishnaraj said. "People started realizing that we need to do a better job with production."

To standardize mask and shield production processes, BTO created a detailed video and procedure for members to follow. All of their equipment is now checked thoroughly before being donated.

Lizzie Davies and Palak Guleria, co-directors of the Livermore chapter and juniors at Granada High School, reminisced about drinking boba and hanging out after school at a bubble tea shop in downtown Livermore.

"I love our city, and seeing the valued members of it slowly lose their livelihoods breaks my heart," Davies said. "Now we get to give back to the businesses that helped us get through school."

BTO is still growing, Yang said, with new chapters being added all over the country; there are four in New York alone. Guleria and other chapter directors also have reached out to elected officials, including Dublin Vice Mayor Arun Goel and Rep. Eric Swalwell (D-Castro Valley), to broaden their relationships and build the organization's credibility. And the organization has added hand sanitizer to its care packages.

Yang and other BTO members hope to add other new dimensions, including vaccine awareness campaigns, economic package donations and a mobile app to supplement the website.