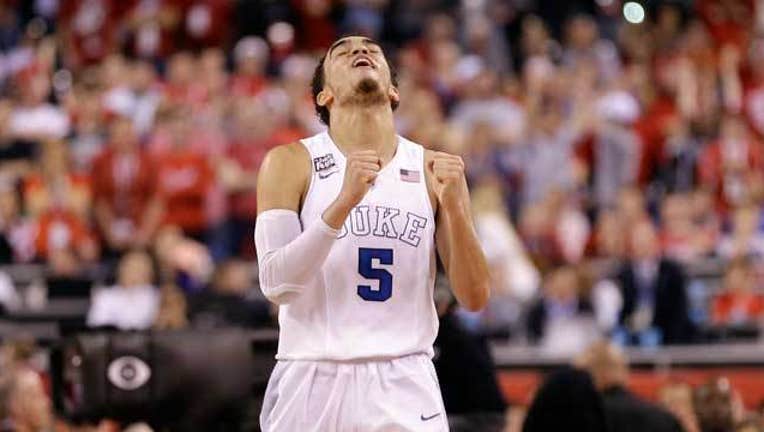 INDIANAPOLIS (AP) — Call them freshmen. Please, do not call them kids.

Led by Tyus Jones and Jahlil Okafor, Duke's talented group of youngsters outscored Wisconsin by 14 points over the final 13 minutes Monday night to grit out a 68-63 victory for the program's fifth national title.

Okafor, the likely first pick in the NBA draft if he decides to leave, got outplayed by Badgers center Frank Kaminsky but came through when the pressure was highest. He made two straight buckets over Kaminsky, sandwiched between a pair of 3-pointers from Jones to help the Blue Devils (35-4) turn a one-time nine-point deficit into an eight-point lead with 1:22 left.

A furious Wisconsin rally ensued, but it came up short. Then, it was Okafor on the bottom of a rowdy, raucous dog pile — a scene very reminiscent of the last time the Final Four was Indianapolis, back in 2010 when Duke won that one, too. The Blue Devils also took one here in 1991 — the Grant Hill, Christian Laettner squad.

"They showed such grit tonight," said coach Mike Krzyzewski, whose five titles puts him alone in second place on the all-time list behind John Wooden. "Our bench was spectacular, and like we said about two months ago, eight is enough. Eight is enough."

Among the eight who share all the playing time are Okafor, Jones and another freshman, Justise Winslow. They all might be one-and-dones.

But Grayson Allen? The most unheralded of Krzyzewski's first-year players, who averages four points a game, stepped up with Okafor on the bench for much of the second half in foul trouble. Allen, the slam-dunk champion at the high school McDonald's All-American contest last year, scored 16 points and kept Duke in it when Wisconsin (36-4) looked like it was about to run away.

This was a savvy, calm, collected comeback against the team that wrote the book on that all season. Wisconsin kept its cool two nights earlier in an upset over undefeated Kentucky and looked to be pulling away early in the second half of this one.

Kaminsky outscored Okafor 21-10 but struggled to get a good look down the stretch. On Okafor's first late bucket, Kaminsky tried to wrap an arm around him, but Okafor just powered his way through it for the bucket and the foul. He missed the free throw, but a different point had been made.

Nigel Hayes had 13 points and Sam Dekker, the key guy down the stretch against Kentucky, had a very quiet 13 for the Badgers, who were trying to bring their first title back to Madison since 1941.