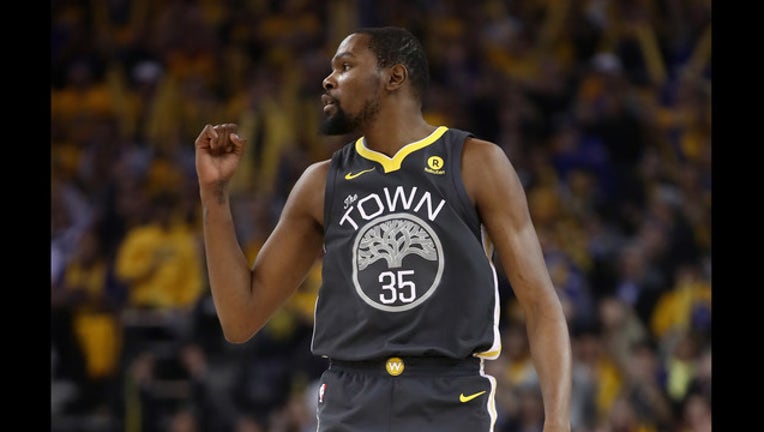 OAKLAND, Calif. (AP) - Kevin Durant sparked a decisive third-quarter run on the way to 32 points, Klay Thompson added 31 points and five assists in another superb playoff performance and the Golden State Warriors rallied in the second half to beat the San Antonio Spurs 116-101 on Monday night for a 2-0 lead in their first-round series.

As Stephen Curry remains out likely for the entire series nursing a sprained left knee, the defending champions used all the offensive power they had to take both home games in the best-of-seven series. Wearing a dark checkered sport coat, Curry was all smiles watching another lopsided win without him.

Thompson followed up his brilliant 11-for-13 shooting day in a 113-92 Game 1 rout Saturday by hitting 12 of 20 shots. Durant also had six rebounds and six assists for the Warriors, who went without key backup big man David West down the stretch after he sprained his left ankle early in the fourth.

Coach Steve Kerr stuck with JaVale McGee as his starting center and the 7-footer contributed 10 points and seven rebounds as the well-rounded defending champions again showed off their remarkable depth.

LaMarcus Aldridge scored 34 for the Spurs and Rudy Gay moved into the starting lineup and scored 12 points.

Game 3 is Thursday as the series shifts to San Antonio.

Thompson managed just three shots in the first quarter and began 1 for 5. He pounded the basketball down with two hands, frustrated, midway through the second quarter. Then he found his groove.

A baseline 3 with 55.9 seconds left before halftime was his first of the night and got Golden State within 49-45 before the Spurs took a 53-47 lead at intermission.

Draymond Green began 0 for 5 before his first basket on the opening possession of the fourth quarter and Durant missed his five 3-point tries in the first half then finally hit from deep early in the third.

The Warriors opened the third on a 19-5 run to take charge but this time the Spurs didn't go away.

Spurs coach Gregg Popovich went with Gay in the starting lineup for Kyle Anderson in an effort to generate more scoring -- and his team still struggled to make shots.

Popovich said before the game that Golden State in Game 1 played "the most stifling defense we faced all year long. That was the best defensive 48 minutes that we have competed against all year long."

Kerr knew Popovich would have his team better prepared.

And the Spurs showed higher intensity on both ends through the first half, working to keep the ball out of Durant's hands or contest shots while jumping in passing lanes to force mistakes.

Andre Iguodala, the 2015 Finals MVP, started a second straight game and had 14 points, seven rebounds and five assists as the Warriors beat the Spurs for the 10th time in 11 games covering the regular season and playoffs.

Spurs: Aldridge made all 12 of his free throws. ... The Spurs missed 9 of their first 11 3s and were 4 for 28 from long range. ... San Antonio lost its sixth straight games overall against the Warriors at Oracle Arena. ... The Spurs took their first lead of the series, 18-17, with 4:20 left in the first quarter. They trailed from wire to wire in the series opener.

Warriors: After getting 32 assists on 44 field goals in the series opener, the Warriors tallied 24 assists on 41 baskets. ... Golden State has won nine straight postseason Game 2s, all at home, and 11 consecutive home playoff games overall.

West scored on three straight second-quarter possessions and finished with 10 points and four rebounds in 14 minutes.

But he got injured with 9:59 left defending Aldridge and headed to the locker room, despite appearing to try stretching out his legs to return.

Popovich on whether he saw potential in Kerr to coach during Kerr's four years for San Antonio:

"Oh, sure, I mean are you kidding me? He played for Phil (Jackson) for 97 years and he learned a lot and won championships. ... He's a no-brainer."