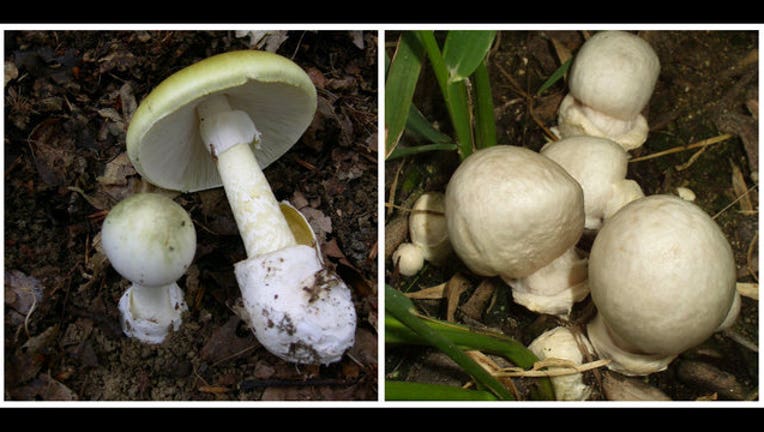 OAKLAND, Calif. (BCN) - Visitors to East Bay parks this fall and winter are being asked to be aware of mushrooms so poisonous the mushrooms can kill.

According to the East Bay Regional Park District, after the first rains of the fall, mushrooms grow abundantly in the region's hills. While some are beautiful with dazzling colors, they can also be deadly.

Two of the world's deadliest mushrooms grow in the Bay Area, the Death Cap and the Western Destroying Angel.

The Death Cap is a medium to large mushroom and usually has a greenish-gray cap, white gills, a white ring around the stem and a large white sac at the base of the stem.

It usually appears right after fall rains and typically grows around oak trees, but has been seen growing around other hardwoods, park district officials said.

It was accidentally introduced into North America and is now colonizing the West Coast.

The Western Destroying Angel is a medium to large mushroom with a creamy white cap, white gills, a white ring around the stem that disappears with age, and a thin white sac at the base.

The Western Destroying Angel grows in late winter into spring and is associated exclusively with oaks, according to the park district. It's native to California.

Both mushrooms have anatoxins, which are a group of molecules that inhibit metabolism in many animals.

In mammals, the anatoxins typically first affect the kidney and liver. Symptoms don't usually occur until as many as 12 hours after someone eats one of the mushrooms, park district officials said.

The Death Cap and The Western Destroying Angel are behind the most cases of mushroom poisonings in California but deadly anatoxins can be also found in the deadly Galerina and Lepiota, which also occur in the Bay Area, according to the park district.

Park officials want to remind visitors that collecting mushrooms is not allowed anywhere in the East Bay Regional Park District.

Anyone who's legally harvesting mushrooms elsewhere is encouraged to learn about the Death Cap and the Western Destroying Angel to avoid putting them on anyone's dinner table.

Park officials encourage pet owners to keep a close eye on their pets and get in touch with a veterinarian if a pet may have eaten a poisonous mushroom.