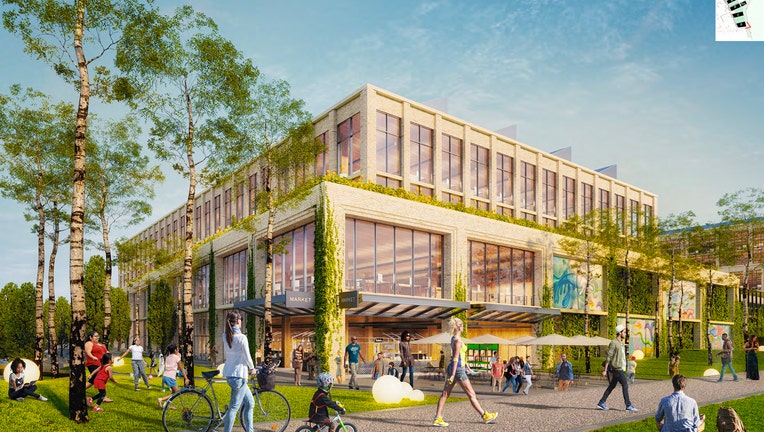 A rendering of the trail entry of the proposed 'The Landing' project in East Palo Alto, Calif. The proposed project consists of four office buildings and includes an auxiliary building to be used as a tenant amenity with a small public café. The tota

EAST PALO ALTO, Calif. - East Palo Alto councilmembers on Tuesday reviewed and appeared to welcome the 1990 Bay Road "The Landing" project, which proposes developing office spaces at a 17.8-acre site at the end of Bay Road near Cooley Landing.

However, councilmembers questioned how the developers planned to address traffic and job training opportunities.

Harvest Properties, Inc., an Oakland-based real estate developer, submitted a preliminary application for the project in 2020. The project proposes four office buildings or 918,000 square feet of space for research and development, laboratories and retail, between Bay Road and Weeks Street. It also includes seven acres of open space such as a public plaza and dog park.

"The Landing" is one of the four largest projects proposed in the Ravenswood Business District / 4 Corners Specific Plan update, a process which aims to guide future development in the city with the input of community members. East Palo Alto Mayor Carlos Romero said that traffic will be one of the biggest constraints that developers for major projects will have and asked how Harvest Properties planned to mitigate traffic concerns. 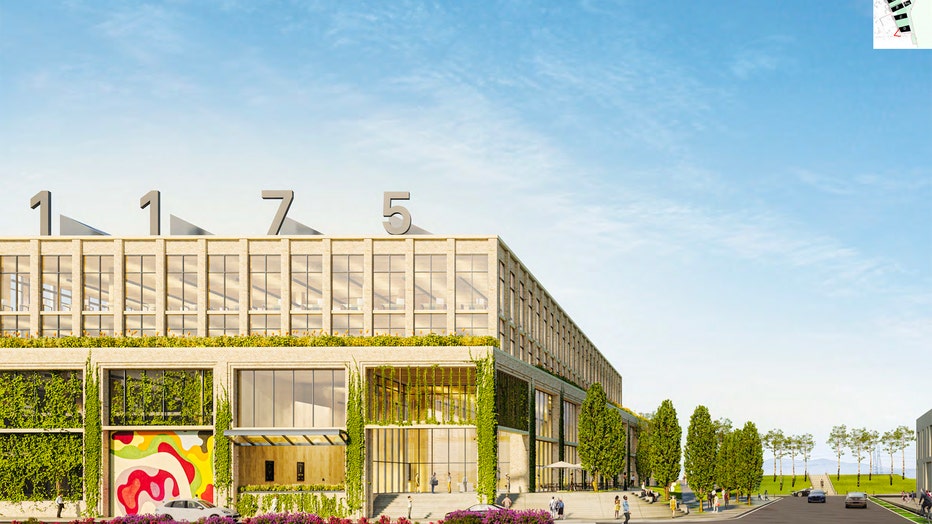 A rendering of the Weeks Street entry of the proposed 'The Landing' project in East Palo Alto, Calif. The proposed project consists of four office buildings and includes an auxiliary building to be used as a tenant amenity with a small public café. T

Preston O'Connell, a partner at Harvest Properties who spoke at the meeting, said there is not one silver bullet that solves the traffic issue but they would try various approaches like creating drop-off zones, providing bike-sharing services and off-site solutions like widening Bay Road.

Romero was also skeptical about the height of one of the buildings, which would exceed the heights allowed under the Specific Plan's zoning regulations.  The developers proposed an increased height at one of the buildings at Weeks Street in order to accommodate a parking garage underneath.

"We decided that if the parking garages were built separately, they would act as a wall blocking off the project," O'Connell said. "It could be an eyesore to the community, so we incorporated them underneath the building to largely hide them and plan to screen them with art and greenery."

Councilmembers also asked about business opportunities for the community. Councilmember Lisa Gauthier said it was important to support small businesses, as mom and pop businesses often cannot afford the costs to operate or rent space.

The project proposes a community marketplace, which would allow temporary and permanent retail spaces for local businesses. The developers plan to offer community spaces rent-free and provide a $1 million support grant for community businesses.

Gauthier also asked whether job training and opportunities would be given to East Palo Alto residents.

"The last thing we want to do is have this project move forward and East Palo Alto residents not be qualified for the jobs that are there," Gauthier said. "How do we make sure they're trained for the jobs of the future and that they're going to be able to participate?"

Blair Volckmann, another partner at Harvest Properties, said they would explore what job training would look like for the office spaces and O'Connell said that their goal is to design the buildings to be flexible for a variety of tenants in different industries, like technology and life sciences.

Councilmember Antonio Lopez acknowledged the efforts of Youth United for Community Action (YUCA), who raised awareness about the harmful effects of the toxic waste facility that previously existed at the site. Since then, the Environmental Protection Agency and other agencies have provided funding to remediate the site.

Lopez asked developers to integrate that history in the project.

Mayor Romero said that the project needed to benefit the community in whatever way the community decides, which would be decided as the city updates the Specific Plan.

"Ultimately the decision on what community benefits occur in East Palo Alto and how they should be implemented and paid for, and what priorities we have, really do not lie with developers' plans but they lie with the community," Romero said. "I think housing is going to play a big role in that."

While affordable housing is not directly included in the project - due to restrictions that prevent residential housing from being built on the site - developers estimate the project could generate about $2.25 million annually for affordable housing and job training through Measure HH, a parcel tax measure on commercial office space.

Following Tuesday's meeting, city staff will send a letter to the developers and Harvest Properties can then submit a formal application at a later date.

More information about the project is available at www.thelanding-epa.com. A video recording of Tuesday's meeting and a meeting agenda with details are available here.