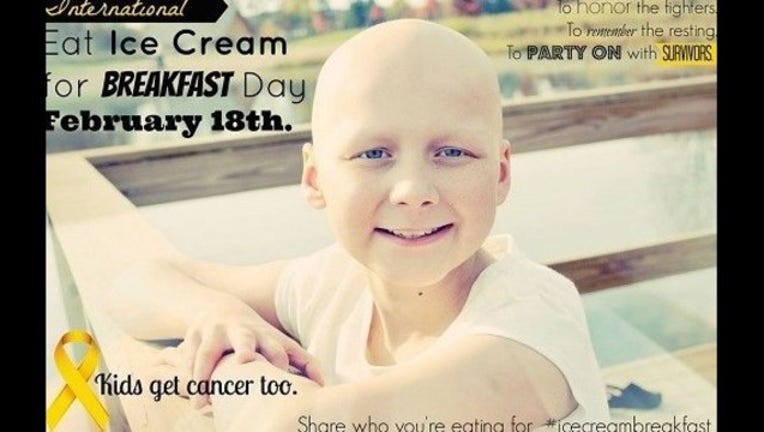 MINNESOTA--KMSP--A Minnesota family from Forest Lake is overwhelmed by the worldwide support they're getting for "Eat Ice Cream for Breakfast Day" – a day they created to honor their daughter Malia and other kids who have lost their lives to cancer, to support the kids fighting cancer, and to celebrate the survivors.

9-year-old Malia Grace passed away after a long fight with cancer on Dec. 7, 2010. One thing she loved was having ice cream for breakfast so her family remembered her each year on her birthday for doing just that.

In 2013, a larger group of about 50 close friends and family joined in on a virtual birthday party for her by taking pictures of themselves eating ice cream and posting them to Facebook.

"In the creative style of her spirit, people sent silly, crazy and smiling pictures from Malls, drive-thru's, kitchen tables, couches and cars," Malia's mom Annette said. "They were silly and crazy and smiling and laughing in every single picture, and as I sat in front of our computer screen at home the tears fell."

Last year, someone suggested that eating ice cream for breakfast should become a national holiday to honor all children who have battled childhood cancer. On a whim, the family created a graphic to share on social media to spread the word.

The photo went viral with thousands of people from over 12 nations joining in and sharing photos enjoying ice cream to honor the kids fighting cancer. It is even referred to as an official day now on daysoftheyear.com

"For those close to us it's still about celebrating Malia's birthday, but in grand Malia style it's become so much bigger than our little family," Annette Peterson said. "There are now people literally around the world who are going to join us in eating ice cream to honor, cheer on and remember all the childhood cancer warriors they know."

According to their Facebook page, people from over 83 different countries are supporting, remembering and celebrating the international holiday this Feb. 18, 2015.

You can join in by eating ice cream and sharing your photos on their facebook page or on your own. When posting a picture you're asked to use the hashtags #icecreamforbreakfast and #kidsgetcancertoo.