Tuesday marked a somber night in El Monte after two police officers were killed in the line of duty.

LOS ANGELES COUNTY, Calif. - Two police officers are dead after being shot during an ambush while in the line of duty in El Monte.

The El Monte Police Department responded to a call of a possible stabbing at a motel near Garvey and Central avenues Monday evening. Upon arrival, a gunman opened fire at the responding officers, El Monte city officials said in a press release.

Two of the officers - Corporal Michael Paredes and Officer Joseph Santana - were hit in the shooting and were taken to LAC-USC Medical Center. Medical personnel did everything they could to revive the officers. However, both Paredes and Santana were later pronounced dead at the hospital.

"They paid the ultimate sacrifice – serving their community, trying to help somebody," said interim El Monte police chief Ben Lowry. "Today, they were murdered by a coward."

"It is with heavy hearts that the city of El Monte and the El Monte Police Department announce the passing of Corporal Michael Paredes and Officer Joseph Santana," according to a city statement.

"Corporal Paredes and Officer Santana were killed in the line of duty ... while faithfully carrying out their sworn duties. Both officers responded to a possible stabbing at the Siesta Inn where they were immediately taken under gunfire. The two police officers were transported to LAC-USC Medical Center where they succumbed to their injuries," the statement said.

"Corporal Paredes and Officer Santana were both raised in the city of El Monte and had a strong connection to the community they served."

The gunman was also shot and killed at the scene, according to the Los Angeles County Sheriff's Department, who is helping El Monte PD with investigations.

He has since been identified as 35-year-old Justin Flores. Officials said Flores was due in court on June 27 for a probation violation. The day before the shooting, Flores’ probation officer filed a request with LA County Superior Court for a revocation hearing, due to a possible probation violation when a woman reported he had assaulted her.

Two police officers who were shot in the line of duty have died at the hospital, according to El Monte city officials.

Officials did not specify how the shootings broke out in the first place or what ultimately killed the suspect. 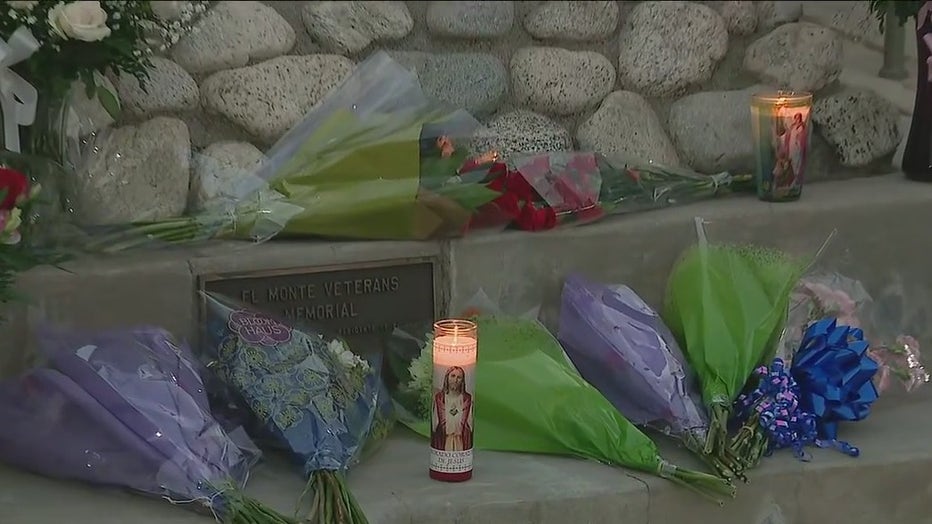 "There are no words to describe our grief and devastation by this senseless act as we learned about the passing of two of our police officers. It weighs heavy on our hearts and we are sending our support to their families. We would also like to thank the El Monte community and our surrounding government agencies for the outpouring support we have received in the last few hours."