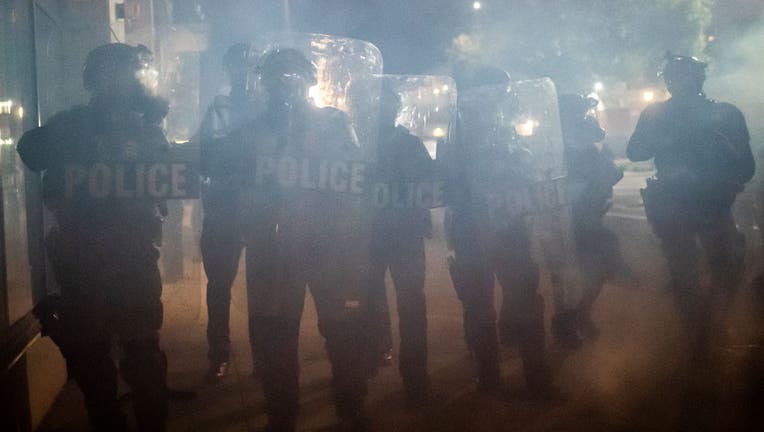 Night after night in Portland, tear gas and other crowd control devices have enveloped protesters and bystanders in airborne chemicals that settle on the ground, later to be washed into storm drains.

Amid allegations that human health and the environment are suffering the consequences, five environmental groups represented by the ACLU of Oregon and others sued the Department of Homeland Security on Tuesday. The federal lawsuit alleges the U.S. government violated federal environmental law by deploying “an unprecedented amount of dangerous chemical weapons” without assessing their environmental impacts beforehand, as required by the National Environmental Policy Act.

There was no immediate response to a request for comment from federal authorities.

With the city experiencing some of the most sustained Black Lives Matter protests in the country, efforts by local officials and researchers are underway to determine whether, and how, people and the environment are being affected.

Cyanide and heavy metals such as chromium and zinc were found by Portland’s Bureau of Environmental Services at much higher levels in stormwater catch basins alongside a protest site than elsewhere in the city, the bureau said in a report last month.

RELATED: Protesters knock down Roosevelt and Lincoln statues in Portland

City officials said most contaminant levels in stormwater taken from a collection point 700 feet from the Willamette River, which bisects Portland, were lower than samples from a protest site several blocks further from the waterway.

“While pollutant levels that enter the Willamette River are thankfully low, the city is concerned about any and all additional pollution loads,” Environmental Services Director Mike Jordan said in September.

Oregon’s Department of Environmental Quality noted that “the repeated deployment of tear gas in downtown Portland has led to elevated levels of certain contaminants” in stormwater drains. But spokeswoman Susan Mills said the concentrations found in stormwater catch basins “are not likely high enough to cause immediate impacts to the environment.”

Environmentalists, though, are troubled that the drainage systems around the federal courthouse and the Immigration and Customs Enforcement building — both sites of protests that have seen heavy tear gas use — channel stormwater directly into the Willamette.

On a recent afternoon, activist Juniper Simonis stood knee-deep in the river with a mesh colander. Simonis scooped up sediment and found a rubber buckshot pellet. Then Simonis, an environmental consultant who has “These Gams Kill Fascists” tattooed across both legs, found a larger pellet that likely came from a type of grenade that often contains tear gas.

The objects raise questions about the presence of invisible chemicals and heavy metals from the crowd control devices, said Travis Williams, executive director of Willamette Riverkeepers, one group suing the federal government.

“It would seem that those pieces of hardware and the pellets ... could be indicative of the contaminants making it to the river as well,” Williams said.

The lawsuit says “the presence of chemicals, sediment, and munitions debris ... in the Willamette River waters can cause negative effects to recreationalists, as well as wildlife.” It asks the court to stop the use of tear gas and other munitions.

The city report said high levels of cyanide, hexavalent chromium and barium in sediment in catch basins near the courthouse indicate there may be an accumulation from chemical munitions. And Andrew Whelton, associate professor of environmental and ecological engineering at Purdue University, said that's concerning.

“If contaminants accumulate in sediment, they may leach out over time or ... may be released into the water column,” Whelton said in an email.

RELATED: Portland mayor spars with US on deputized police officers

Lori Pillsbury, a lab administrator at the state environment department, recently told an Oregon House panel that “some of the products and the propellants associated with tear gas use can be detrimental to water quality and aquatic life.”

State Rep. Karin Power, a Portland Democrat who chairs the committee, is worried about the health of people exposed to heavy amounts of tear gas.

People are likely being exposed to substances at much higher concentrations than what was found in catch basins, said Sven-Eric Jordt, a researcher at Duke University’s School of Medicine. He said air samples should be taken during protests.

Medical experts say there are few studies on health effects of tear gas. To try to fill the information gap, two surveys are being done, including by one of the nation’s largest healthcare groups.

The Kaiser Permanente Center for Health Research, in Portland, launched its survey after hearing that people were suffering health impacts of tear gas immediately after exposure and sometimes for weeks, said principal investigator Britta Torgrimson-Ojerio.

“These reports included symptoms for which there is almost no peer-reviewed evidence, including menstrual cycle changes, prolonged headaches, and gastrointestinal issues such as lack of appetite, diarrhea, and nausea,” said Torgrimson-Ojerio.

She hopes the survey will become a starting point to gain more insight.

Another survey, by Planned Parenthood North Central States and the University of Minnesota, is “very exploratory” and could also help determine what future studies need to be done, said Asha Hassan, lead researcher.

Among obstacles to sorting out health and environmental impacts is lack of disclosure. There also is a lack of oversight by federal agencies, according to a previous AP investigation.

The amounts of ingredients the crowd control agents contain are considered trade secrets, Portland officials said. And the devices don't always list the substances created when they're deployed.

For example, safety data sheets for HC (hexachloroethane) smoke grenades — which have been deployed in Portland — don't list zinc chloride, although it's a known component of the smoke.

Zinc chloride has resulted in fatalities and injuries to unprotected soldiers, according to a U.S. Army report. A European Union agency says it “is very toxic to aquatic life.”

Figuring out precisely what tear gas components are in the environment is also a challenge.

Pillsbury said she can't draw a direct connection between substances found at high levels in catch basins and crowd control munitions “because these contaminants are associated with many daily activities and urban runoff.”