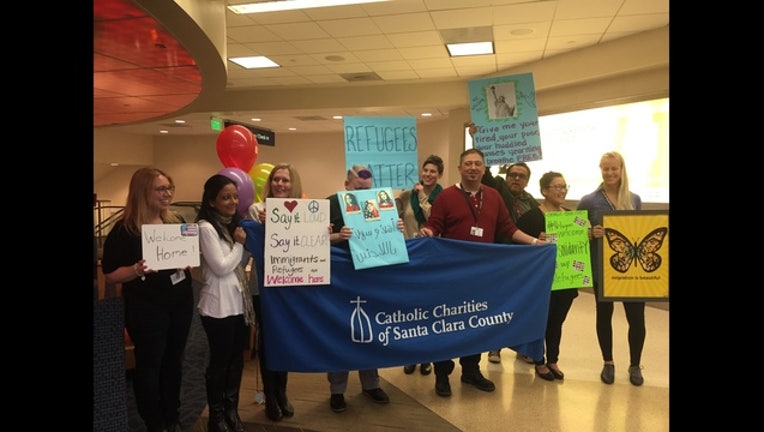 SAN JOSE, Calif. (BCN) - A 17-year-old Eritrean orphan who was nearly prevented from entering the United States this week met her new foster mother at the airport in San Jose this afternoon.

The girl was scheduled to arrive on Tuesday, but her travel was canceled after President Donald Trump's executive order on immigration suspended the refugee admissions program.

About 15 staffers and supporters from Catholic Charities of Santa Clara County, who matched the girl with her foster mother, greeted the teen with balloons and signs reading "Refugees matter" and "Building bridges, not walls."

Prior to the girl's arrival, several passersby in the airport expressed support at the pro-refugee signs. One jeered.

When she arrived, the teen, who speaks no English, ran into the arms of her best girlfriend from the Ethiopian refugee camp where they both lived.

Overwhelmed with emotion, the girls quickly retreated from the group along with the teen's social worker, foster mother and translator.

The girl's 42-year-old Italian-born foster mother, Laura Fantone, is a sociologist who lives in Berkeley and teaches at Santa Clara University.

"To just have safety, have freedom in your life, is not something you can take for granted when you live in a refugee camp," Fantone said. "A lot of people are leaving Eritrea right now, risking their lives, crossing the Mediterranean."

Samuel Hagos, 19, was also at the airport with his foster brother and their foster mother.

Hagos and his brother, who are also Eritrean, knew the 17-year-old at the same refugee camp two years ago. His mother is fostering four Eritrean teenagers.

Ten are from the seven countries threatened with long-term bans in Trump's executive order.

While religious lines have put some refugees in even more vulnerable positions than others under the Trump administration, Catholic Charities of Santa Clara County CEO Greg Kepferle said these distinctions have little to do with his organization's work.

"Our faith calls us to serve everyone in need, especially the most vulnerable," Kepferle said.