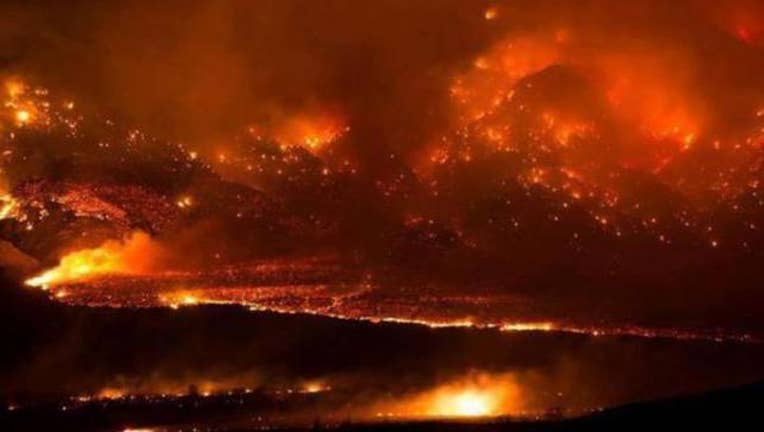 SWALL MEADOWS, Calif. (AP) — Four firefighters were injured battling a wind-driven wildfire that ravaged communities along the eastern slope of the Sierra Nevada and destroyed 40 homes in an area that could see more wildfires as the state enters its fourth year of drought.

As the fire headed into a fourth day Monday, more than 200 people were still under orders to stay away from their homes in Swall Meadows and nearby Paradise, California Department of Forestry and Fire Protection Capt. Liz Brown said. People whose homes were not destroyed could be allowed back in as early as Monday afternoon, Brown said. The firefighters' injuries were minor, she said.

Rain moved in over the last few days, but it hasn't been enough to completely put out the fire. A three-year drought acrossCalifornia has created extremely dry timber brush that fueled the flames and pushed them all the way up the Sierra slopes to the snow line around 8,000 feet, she said.

The fire started Friday afternoon near a highway on the border of Inyo and Mono counties. It blew up when 50 to 75 mph winds whipped through wooded areas near the two communities for about three hours, Brown said. The fire is 85 percent contained and is expected to be completely out by Tuesday afternoon.

The cause of the fire was under investigation, and authorities didn't yet to tally the damage, Brown said.

Firefighters made progress after rain moved in, and they have since contained 85 percent of the 11-square-mile blaze that has charred about 7,000 acres.

"The threat (of a wildland fire) is there all year round. There are just peak periods when it's a little more dry and dangerous," Brown said.

More than 500 fire crews battled the blaze over the past few days.

Utility workers tended to the charred power poles along the roads in the two towns, and forestry crews sawed at fallen trees that blocked a main thoroughfare. Nearby, two gutted, gray trucks rested on a driveway that led to a pile of rubble.

Meanwhile, officials running the evacuation center in Crowley Lake said they received an outpouring of support. Pizzas, fresh fruit and a birthday cake collected on a folding table, while a white board filled up with the names and phone numbers of people who had volunteered their homes for displaced humans and pets.

So many had opened their homes that nobody stayed in the shelter overnight.