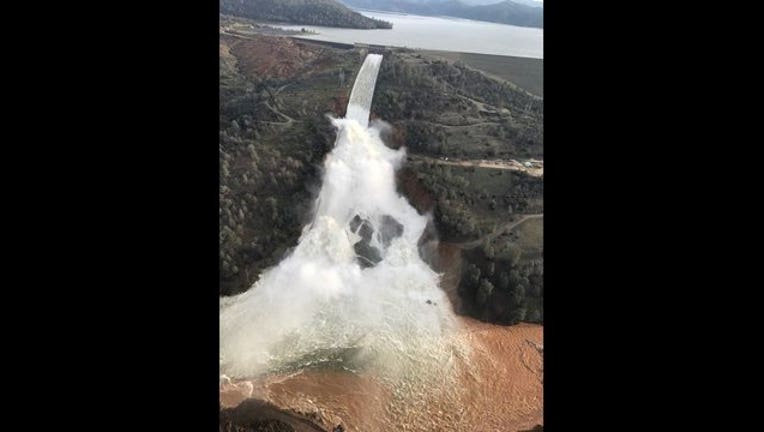 OROVILLE, Calif. (AP) -- Helicopters dropped giant rock-filled sandbags into place Monday to shore up a California reservoir that had threatened to breach its banks and unleash a 30-foot wall of water, but officials said an evacuation order covering nearly 200,000 people would stay in place until they are sure it's safe to return home.

Officials defended their decision to issue the hasty order to abandon homes downstream from the nation's tallest dam, about 150 miles northeast of San Francisco. They said it was necessary for public safety after engineers spotted a hole in an emergency spillway, which they feared could have failed within an hour.

The water level of the massive reservoir known as Lake Oroville dropped Monday, slightly easing fears of a catastrophic collapse. But with more storms on the horizon, crews raced to fortify heavily eroded soils where water flowed over the edge of the reservoir and carved huge channels in the earth as it gushed toward the Feather River.

The acting head of the state's Department of Water Resources said he did not know if anything had gone wrong and was unaware of a 2005 report that recommended reinforcing the earthen emergency spillway with concrete for just such an event. The spillway had never been used in the dam's nearly 50 years of operation, and it was not near capacity when it began to fail.

"I'm not sure anything went wrong," Bill Croyle said. "This was a new, never-having-happened-before event."

Croyle and the local sheriff sought to reassure the public that downstream communities were safe until water began spilling over the lake's edge Sunday and a chocolate-colored torrent began chewing through the slope below it.

The Department of Water Resources said conditions were stable at noon and then tweeted an evacuation order at 4:45 p.m. warning of a possible failure within the hour, saying "this is not a drill."

Chaos ensued as anxious residents rushed to pack up their families and abandon several communities in Butte, Yuba and Sutter Counties. The flat northern Central Valley is known mainly for its abundant agriculture, which is fed by dammed-up rivers that tumble down through the Sierra Nevada foothills.

It took some people seven hours to travel to evacuation centers that should have been an hour away, said Chico Councilman Andrew Coolidge, who visited with evacuees in packed shelters in his city.

Butte County Sheriff Kory Honea insisted the evacuation had been accomplished in a "fairly timely fashion" and a "fairly orderly manner."

Patrick Miner of Live Oak said he and his family in a caravan of four cars returned home after driving back roads for two hours and feared they would run out of gas. They didn't bother trying to fuel up because lines were hours long at gas pumps.

"People were just panicking, honking and yelling at each other," he said. "I just got nervous and decided to hunker down. It was pretty scary."

Honea could not estimate when people will be able to return home, but said he's working on a "repopulation plan" to let residents return to areas least at risk of flooding.

The threat emerged after weeks of storms dumped rain and snow across California, particularly in northern parts of the state.

While the wet winter has been a boon for water supplies, it has created a challenge in balancing the need for water and hydroelectric power with protecting flatland communities from floods during times of excessive rain or rapidly melting snow.

The Department of Water Resources began releasing water down its main spillway last week to make more room in the reservoir behind the 770-foot-tall Oroville Dam.

After a chunk of concrete tore out of the spillway, creating a 200-foot-long, 30-foot-deep hole that continues growing, water managers began using the emergency spillway for the first time in its 48-year history. Eventually, the flow of water ripped through a road below and carved out deep chasms in the ground.

Trucks hauled boulders to fill the giant crevices in the spillway, and helicopters lifted big sandbags into place.

The main concrete spillway was used to drain water from the lake at about three times the rate it was filling up. Officials want the level to drop 50 feet to make room for storms expected later this week.

Environmental groups raised concerns years ago about the stability of the emergency spillway, but state and federal officials dismissed them and insisted the structure was safe, according to records.

In 2005, three advocacy groups complained to the Federal Energy Regulatory Commission that using Lake Oroville's earthen spillway would cause significant erosion because it was not armored with concrete.

They said soil, rocks and debris could be swept into the Feather River, potentially damaging highway bridges and power plants. The groups warned of a complete failure of the dam itself, threatening lives and property.

Nearly three years later, state officials said no "significant concerns" about the emergency spillway's integrity had been raised in any government or independent review.

Gov. Jerry Brown requested federal assistance from the Trump administration, setting aside previous criticism of the president and praising his plan to invest $1 trillion on infrastructure.

"I'm sure that California and Washington will work in a constructive way," Brown said. "There will be different points of view, but we're all one America and we all have challenges that we share in common."

U.S. Sens. Dianne Feinstein and Kamala Harris, both Democrats, called on the president to provide $162.3 million in disaster assistance.