Paul Volcker, who served as Federal Reserve chairman in the early 1980s, has died, according to his office.

LOS ANGELES - Paul Volcker, who as Federal Reserve chairman in the early 1980s elevated interest rates to historic highs and triggered a recession as the price of quashing double-digit inflation, has died, according to his office.

Volcker took charge of the Fed in August 1979, when the U.S. economy was in the grip of runaway inflation. Consumer prices skyrocketed 13% in 1979 and then by the same pace again in 1980.

Working relentlessly to bring prices under control, Volcker raised the Fed’s benchmark interest rate from 11% to a record 20% by late 1980 to try to slow the economy’s growth and thereby shrink inflation.

Those high interest rates made it so expensive for people and companies to borrow that the economy weakened steadily. By January 1980, a recession had begun. It lasted six months. A deeper and more painful downturn took hold in July 1981. It endured for 18 months and sent unemployment up to 10.8% in November and December 1982, the highest level since the Great Depression. 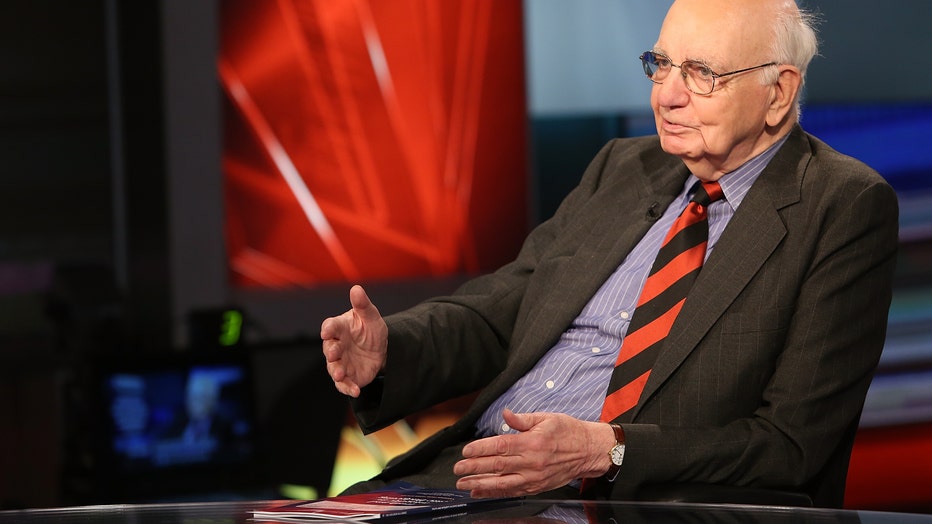 In a statement Monday, former President Jimmy Carter, who had chosen Volcker to be Fed chairman, called him a “giant of public service."

“Paul was as stubborn as he was tall, and although some of his policies as Fed chairman were politically costly, they were the right thing to do,” Carter said.

In the early 1980s, Volcker was vilified by the public for having triggered a severe recession in order to curb runaway price increases. Home builders put postage stamps on bricks and on 2-by-4 wooden planks and mailed them to the Fed to protest how super-high interest rates had wrecked their businesses.

Auto dealers, stuck with lots full of unsold cars, did the same with car keys. Angry farmers, struggling with high debts, drove their tractors to Washington and blockaded the Fed’s headquarters.

One of the mailed 2-by-4s ended up with an enduring legacy at the Fed: David Wilcox, a young staffer under Volcker who later rose to direct the Fed's research and statistics division, said he received one of the 2-by-4s from Larry Slifman, a former senior economist in the division, and kept it on his desk until his retirement last year. Wilcox said he held onto it “as a constant reminder of how vitally important it is that no major central bank ever lose control of inflation again, creating the need for someone like Volcker to do the incredibly courageous things he did.”

David Jones, an economist and author of several books on the Fed, ranks Volcker above all other chairmen since World War II.

“Volcker was transformative in terms of Fed policy," Jones said. “We are still enjoying the benefits of his success."

By sticking with his policies in the face of ferocious opposition, Volcker implicitly asserted the Fed's independence from political and public interference. Throughout its history, the Fed has been seen as needing to operate independently in order to properly carry out its key functions of of maximizing employment and stabilizing prices. In the past three years, President Donald Trump has challenged that independence with his frequent attacks on the Fed and his demands that it cut rates more aggressively.

Once inflation was subdued, Volcker himself was privately pressured by President Ronald Reagan to lower rates faster than he wanted. James Baker, Treasury secretary during Reagan's second term in the late 1980s, chose supporters of lower rates to the Fed's governing board. This led to Volcker being outvoted on a rate decision in 1986, though his opponents backed down. News reports at the time said Volcker had threatened to resign.

“I had no doubt in my mind that Baker wanted to surround me with his appointees,” Volcker said later in an oral history compiled by the Fed.

The pain of the recession he helped cause eventually produced the desired results: Inflation receded. Once it did, Volcker’s Fed began lowering interest rates. And the economy rebounded vigorously enough for President Ronald Reagan to declare the arrival of “Morning in America’’ on his way to a landslide victory in the 1984 presidential election. Volcker left the Fed in 1987, succeeded by Alan Greenspan.

The Volcker-led victory over inflation is widely credited with beginning what economists call the “Great Moderation’’ — more than two decades of mostly steady economic growth, relatively low unemployment and modest price increases. The Great Moderation ended with the Great Recession of 2007-2009.

Volcker had spent most of his career in the public sector — at the Treasury Department, the Federal Reserve Bank of New York and the Fed board in Washington.

A towering 6 foot 7 and perpetually rumpled, Volcker favored cheap cigars and bad suits. John Connally, a slick Texan who was Volcker’s boss at the Treasury in the early 1970s, once threatened to fire him if he didn’t get a haircut and improve his wardrobe.

Despite his personal austerity, Volcker served in lucrative positions on Wall Street in between his stints in public service, including an early career at Chase Manhattan bank. He was chair of Wolfensohn & Co., an investment firm, from 1988 to 1996.

After leaving the Fed, Volcker took on assignments as a troubleshooter. He ran a commission to investigate what Swiss banks did with the assets of Holocaust victims during and after World War II. The United Nations assigned him to look into allegations of corruption in a UN program to provide food aid to Iraq.

Volcker, who was born in Cape May, New Jersey, on Sept. 5, 1927. He received a bachelor's degree from Princeton University and a master's from Harvard. In 1951, he spent a year at the London School of Economics as a Rotary Foundation Fellow.

His survivors include his second wife, Anke Dening, and two children.

After the financial crisis of 2008, President Barack Obama recruited Volcker as an economic adviser. In that role, Volcker pressed for restrictions on banks’ ability to trade in financial markets with their own money, rather than their clients’, and to invest in private equity and hedge funds.

The regulations, known as the “Volcker Rule,’’ were included in a far-reaching financial overhaul bill Congress passed in 2010. Volcker had little sympathy for big banks in the wake of the financial crisis, which required a taxpayer bailout of big Wall Street firms. He dismissed claims that deregulated financial institutions deserved credit for coming up with innovative products and services.

The only useful financial innovation he’d seen in years, he said, was the ATM.