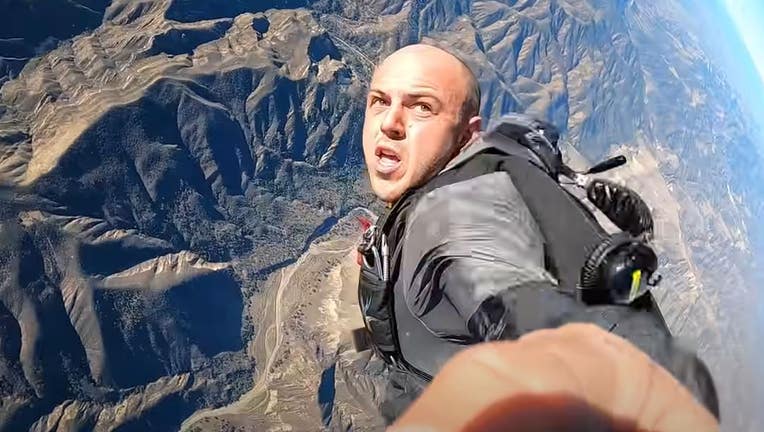 Screen grab from video posted by YouTuber Trevor Jacob. He's seen bailing out of his plane before it crashed in Los Padres National Forest in Santa Barbara County in November 2021. (YouTube/Trevor Jacob/https://www.youtube.com/watch?v=vbYszLNZxhM)

SANTA BARBARA, Calif. - Questions have swirled around a dramatic plane crash video posted by a Southern California YouTuber, as skeptics suggested the crash was staged as a publicity stunt.

Trevor Jacob, who’s also a former Olympic snowboarder, posted the video he titled "I Crashed My Plane," to his YouTube channel on Dec. 23, about a month after the incident.

In the video, he’s seen flying his plane over the Los Padres National Forest in Southern California. Trouble set in not long after take-off and after he gave the camera a thumbs up, saying, "Good times." The video continued to record as the plane’s propeller began to sputter before stopping completely. And then panic, as a series of expletives were heard coming from the pilot.

He eventually opened the door to the aircraft and, already strapped into a parachute, bailed out.

Jacob’s descent was all caught on video, as was the plane crash. The images showed the aircraft gliding, gliding, gliding until it slammed into a hillside before the video from the plane's camera went dark.

The pilot was then seen making a crash landing onto the ground, full of sticks and brush. More expletives were uttered as he’s also heard saying, "Ouch. Oh my God. Oh my God. Get me out of this."

The edited video noted that 20 minutes had passed when Jacob returned to the camera saying, "I guess I should probably document what’s going on."

He showed the scratches and cuts he sustained in the landing and then said, "I’m just so happy to be alive. I'm just kind of taking in what just happened." He also noted that this was precisely why he always flew with a parachute.

The video, which has been viewed more than 1.4 million times, continued for almost eight more minutes, as Jacob moved through the brush seeking help. At one point, he came upon the twisted metal of his wrecked plane. As dusk fell, he continued to document as he finally found fresh water to drink, and then eventually hours after the crash, made it out of the wilderness and found help when he came upon a farmer.

Since being posted last month, the video has triggered a barrage of questions, with many people weighing in on why they believed the crash was staged.

A YouTube search of Jacob’s video also brought up several suggested posts by those identifying themselves as an expert pilot, expressing their suspicions.

Many suggested the pilot could have easily avoided crashing the plane.

Bay Area pilot Mike Henderson, owner of Livermore-based flight training school XL AVIATION, told KTVU that based on what he saw in the video, he found a few aspects to be "very unusual."

Henderson echoed what many online had asked regarding Jacob's parachute, which was on him from the start of the flight. Henderson questioned, "Why he was wearing a chute flying a non-aerobatic plane... no one does," he said.

He also pointed to Jacob’s actions once he realized he might be in trouble, asking why he’s never seen attempting to restart the engine. "Nor did he go through engine out emergency procedures," Henderson noted.

And he pointed to an observation other skeptics had made, "Finally... why did he jump out of the TaylorCraft... he could [have] landed."

Henderson said that federal investigators should have no problems determining what caused the propellor to stop turning.

KTVU reached out to Jacob for comment. While he didn’t immediately respond to our request, in a statement to the New York Times on Saturday, he denied that the crash was deliberate saying, "I’ll happily say I did not purposely crash my plane for views on YouTube."

He went on to say, "I’ve been filming everything I do since I was 5 years old. Documenting this trip was no different than any other day for me."

Both the National Transportation Safety Board (NTSB) and the Federal Aviation Administration (FAA) have launched investigations into the crash.

The NTSB, the lead agency in the probe, told KTVU a preliminary report was published on Jan. 4. It's expected to take six months to a year from the crash, to determine the probable cause of the accident, the agency said.