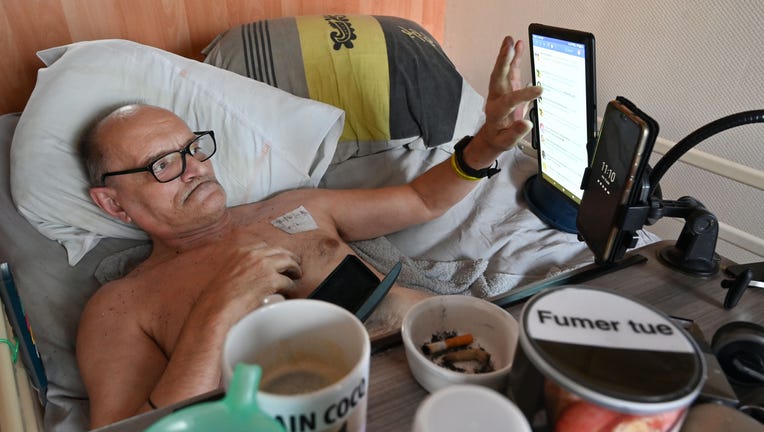 FILE - Alain Cocq, suffering from an orphan desease of the blood, rests on his medical bed on August 12, 2020 in his flat in Dijon, northeastern France. (Photo by PHILIPPE DESMAZES/AFP via Getty Images)

LE PECQ, France (AP) - Facebook on Saturday blocked live broadcasts from a chronically ill bed-ridden man who appealed to French President Emmanuel Macron for a medically-assisted death and who wanted to show what he expects will be a painful end to his life after he announced that he was stopping all food and drink.

Prostrate on his bed, Alain Cocq posted video of himself Friday after taking what he said would be his last liquid meal.

“I know the days ahead are going to be very difficult,” he said. “But I have taken my decision and I am serene.”

In a letter this week, which Cocq also posted, Macron said that French law forbade him from granting his request for the “right to leave with dignity,” with a medically-assisted death.

“With emotion, I respect your approach because it speaks to the very intimate relationship that each of us builds with the end of our life and our death," Macron said in the letter dated Thursday, sent after one of his aides spoke at length with Cocq by telephone in August.

But Macron added that “because I am not above the law, I am not in a position to grant your request."

In a handwritten addition at the end, Macron signed off the letter with the words, “With all of my personal support and my profound respect.”

The nursing homes that most often reported PPE shortages were for-profit, part of a chain, and had COVID-19 cases among residents and staff, according to the Associated Press.

French media have reported that Cocq, a 57-year-old former plumber, suffers from a long-term and incurable degenerative illness. He says that he has lived in great pain for 34 years and that after multiple operations, he prefers to die. In his Facebook post on Friday evening, he said the alternative would be “the degradation of my body."

“I am going to stop hydrating myself when I turn off the lights,” he said. “Given my general condition, it’s likely to be quick, which is what I hope for, because I’m not a masochist.”

He said he would keep taking painkillers.

“The path to my deliverance is starting and, believe me, I am happy about it,” he said. “To those I won’t see again, I say goodbye. Such is life.”

Cocq had planned to subsequently live-broadcast the end of his life that he expects will follow within days of his decision to stop all food, liquids and medicines. But a message Saturday on Cocq's account said that Facebook has blocked him from posting videos until Tuesday.

Facebook confirmed that it had blocked Cocq's live broadcasts.

“Our hearts go out to Alain Cocq and those who are affected by this sad situation," it said in a statement. “While we respect his decision to draw attention to this complex and difficult issue, based on the guidance of experts, we have taken steps to keep Alain from broadcasting live, as we do not allow the depiction of suicide attempts.”