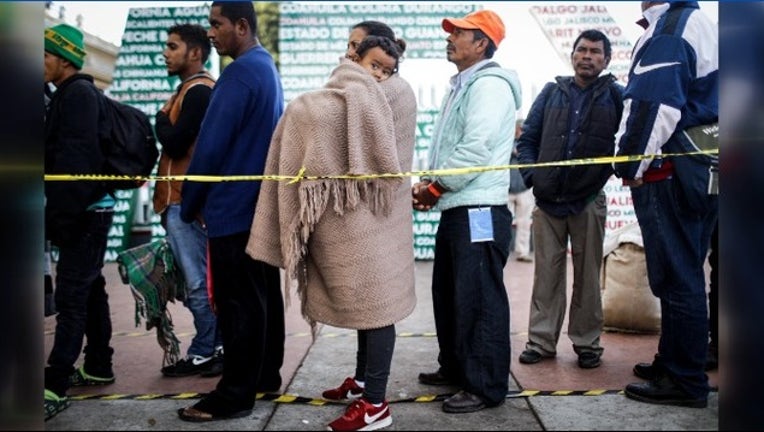 Honduran mother Nubia (C) holds her son Wilmar, 5, as they wait in line for information about applying for asylum in the U.S. on November 23, 2018 in Tijuana, Mexico. They traveled for 43 days in the 'migrant caravan. (Mario Tama/Getty Images)

WASHINGTON (AP) - A federal appeals court in California determined Thursday that a Sri Lankan man who is a member of the Tamil ethnic minority has the right to go before a judge after failing an initial asylum screening.

The decision could have major implications for those seeking asylum, and could further clog the immigration court system that has a massive backlog. It's also another legal loss for the Trump administration's efforts to restrict immigration, delivered by a three-judge panel in the 9th Circuit Court of Appeals - the same region Trump has railed against in the past as an "activist court."

Vijayakumar Thuraissigiam, 46, said he was jailed and tortured for political activity during the civil war between the government of Sri Lanka and the Liberation Tigers of Tamil Eelam, according to court documents. He fled the country in 2016, after he was tortured again by intelligence officers, he said in court papers. He crossed the U.S.-Mexico border on Feb. 17, 2017 where he was arrested by a Border Patrol agent 25 yards into the U.S.

He requested asylum. But he did not pass his initial screening, a "credible fear" interview where he had to show a well-founded fear of persecution, torture or death if he were to return to his home country. The interviews are meant to be inclusive; nearly 90 percent of all asylum seekers pass their initial interview, and then are generally released into the country where they await court proceedings. The number of asylum seekers has ballooned in recent years, and immigration officials say it's in part because migrants know they will be able to live and work in the U.S. while their cases play out. That process could take years, in part because the immigration court has a backlog of more than 700,000 cases. In the end, most people do not end up receiving asylum.

Thuraissigiam said that the agent rejected the claim after conducting only a cursory hearing and refused to hear important context that would bolster his case. He asked for a court hearing to appeal the decision, but was denied it. The American Civil Liberties sued on his behalf.

The three-judge panel in San Francisco agreed Thuraissigiam has a right to go before a judge.

"It will mean that thousands of current and future noncitizens will not be sent back to potential death without a federal court looking at their case," said Lee Gelernt, deputy director of the ACLU's Immigrants' Rights Project. "The historical and practical importance of this ruling cannot be overstated," he said. "This decision reaffirms the Constitution's foundational principle that individuals deprived of their liberty must have access to a federal court."

The panel noted the Supreme Court hasn't considered the question. The only other court to rule on the issue, the 3rd Circuit in Philadelphia, reached a different conclusion. It decided in 2016 that immigrants arrested after just crossing the border were not entitled to a court hearing to challenge deportation.