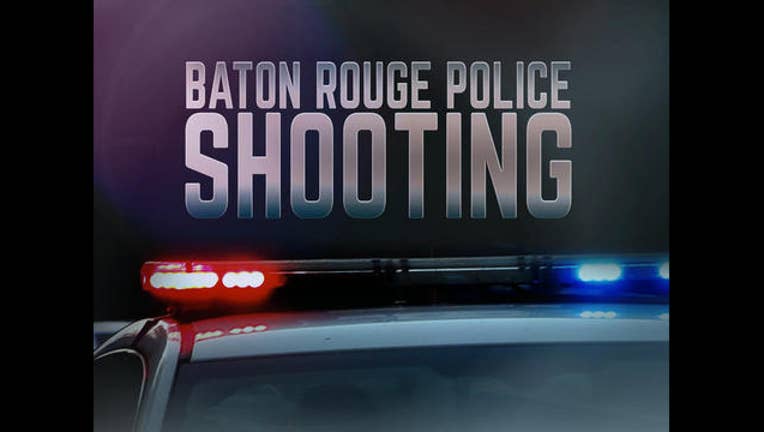 BATON ROUGE, La. (AP) -- In a swift move by authorities to keep tensions from boiling over, the U.S. Justice Department launched a civil rights investigation Wednesday into the video-recorded killing of a black man who was shot as he scuffled with two white police officers on the pavement outside a convenience store.

A law enforcement official said a gun was taken from 37-year-old Alton Sterling after he was killed early Tuesday in the parking lot where he regularly sold homemade music CDs from a folding table. The official was not authorized to discuss the investigation and spoke on condition of anonymity.

But it was not clear from the murky cellphone footage whether Sterling had the gun in his hand or was reaching for it when he was shot. And a witness said he saw police pull a gun from Sterling's pocket after the shooting.

The shooting in the Louisiana capital -- and the shocking video that soon found its way all over the Internet -- set off angry protests in the city's black community and brought calls for an outside investigation. It came at a time when law enforcement officers across the country are under close scrutiny over what some see as indiscriminate use of deadly force against blacks.

Moving quickly just one day after the shooting, Democratic Gov. John Bel Edwards asked the Justice Department to take the lead in the investigation.

"I have very serious concerns. The video is disturbing, to say the least," the governor said at a news conference.

Edwards also met with black community leaders to reassure them about the investigation and to ask their help in keeping protests peaceful. He expressed hope that once the community sees that the shooting is "going to be investigated impartially, professionally and thoroughly" by the Justice Department, "the tensions will ease."

Baton Rouge Police Chief Carl Dabadie Jr. said that Sterling was armed -- Dabadie didn't specify the type of weapon -- but that there are still questions about what happened.

"Like you, there is a lot that we do not understand. And at this point, like you, I am demanding answers," Dabadie said, calling the shooting a "horrible tragedy."

Sterling was confronted by police after an anonymous caller reported being threatened by someone with gun outside the store, authorities said.

In the cellphone video taken by a community activist and posted online, one of the officers tackled Sterling, and the two officers pinned him to the pavement.

Someone yelled, "He's got a gun! Gun!" and one officer pulled his weapon from his holster. After some shouting, what sounded like a gunshot could be heard. The camera pulled away before more shots were heard.

The officers, identified by the chief as Blane Salamoni, a four-year member of the department, and Howie Lake II, who has been on the force for three years, were placed on administrative leave, standard department procedure.

Authorities would not say whether one or both fired their weapons or how many times.

The store owner, Abdullah Muflahi, told The Advocate newspaper that Sterling was not holding a gun during the shooting but that he saw officers remove one from his pocket afterward. Muflahi said an officer fired four to six shots into Sterling's chest.

Quinyetta McMillon, the mother of Sterling's teenage son, trembled as she read a statement outside City Hall, where a few dozen protesters and community leaders had assembled. Her son, Cameron, 15, broke down in tears and was led away sobbing as his mother spoke.

She described Sterling as "a man who simply tried to earn a living to take care of his children.

"The individuals involved in his murder took away a man with children who depended upon their daddy on a daily basis," she said.

A cousin of Sterling's, Sharida Sterling, said he had been selling music there for about six years, often lugging his box of CDs, table and folding chair on two buses to get to the store.

Sharida Sterling said that the store management never had any problems with him but that he was often harassed by police -- she suspected because he was black and a "big guy."

"I don't want them to get away with a slap on the wrist because it could happen to somebody else's brother," she said.

In announcing the Justice Department investigation, the governor was accompanied by black Democrats from Baton Rouge who praised him and others for quickly asking the federal government to get involved.

"We know there's going to be an external investigation. I think it makes all the difference in the world," said state Sen. Regina Barrow.

The governor and police chief urged calm, and Mayor Kip Holden likewise sought to ease tensions, saying, "We have a wound right now, but we'll be making the city and parish whole again."

Baton Rouge, a city of about 229,000, is 54 percent black, according to census data, and more than 25 percent of its people live in poverty.

Police said they have dash-cam video, bodycam video and store surveillance footage of the shooting that will be turned over to the Justice Department.

But Lt. Jonny Dunnam said the bodycam footage may not be as good as investigators hoped for because the cameras became dislodged during the scuffle.

That raises serious questions, said Marjorie Esman, executive director of the Louisiana ACLU. "Right when they're needed most is when two of them malfunction in the same way," she said.

The Justice Department will look into whether the officers willfully violated Sterling's civil rights through the use of unreasonable or excessive force.

Federal investigators must meet a high legal burden to bring a civil rights prosecution, establishing that an officer knowingly used unreasonable force under the circumstances and did not simply make a mistake or use poor judgment.

The man who claimed to have shot the cellphone footage, Arthur Reed, said his company, Stop the Killing Inc., makes documentary-style videos about killings in Baton Rouge.

"We look at ourselves as being a service to the community," Reed said.

Protesters and friends created a memorial to Sterling at the spot where he sold CDs.

Mufleh Alatiyat, an employee of the store, said Sterling often gave away CDs or petty cash or bought food or drink for some people.