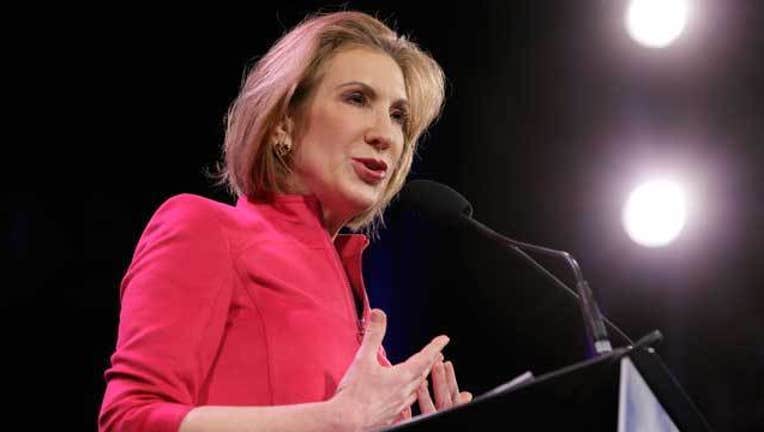 But to do so, Fiorina is taking a page from the gender politics playbook herself.

A former business executive with limited political experience, Fiorina argues that if Republicans nominate her, it would neutralize any advantages the Democrats might get from having a woman at the top of their ticket.

Clinton, who launched her campaign last weekend, has been playing up her life experience as a mother and grandmother, along with her policy work on women's and children's issues. She's not yet directly highlighted the prospect she would be the first female president, something she played down in her failed 2008 campaign.

While Fiorina has yet to declare her own candidacy, she has been positioning herself for weeks as a foil to Clinton, the clear Democratic front-runner. She's been among the sharpest Clinton critics in the emerging Republican field, going after the Democrat's trustworthiness in light of revelations about her private email use as secretary of state, as well as her record as the nation's chief diplomat.

"Like Mrs. Clinton, I, too, have traveled hundreds of thousands of miles," Fiorina said this week, reprising a favorite line. "But flying and traveling is an activity, it's not an accomplishment and unfortunately she didn't accomplish anything as secretary of state."

The 60-year-old Fiorina says she plans to announce whether she's running for president in late April or early May. She's put the likelihood of her running at "higher than 90 percent" and has been making stops in Iowa, New Hampshire and South Carolina — all states that vote early in the primary process.

Fiorina is back in New Hampshire this week, joining a multitude of potential GOP presidential candidates at a two-day forum that could be an early test of who has breakout potential in the state that holds the nation's first primary.

Fiorina says she doesn't want to run based on her sex, but rather to focus on another factor that makes her an outlier in the Republican field: the fact that nearly her entire career has been in business, not the political arena. She was one of the country's highest-ranking female executives during her nearly six years as chief executive at Hewlett-Packard, but was forced out of the company in 2005.

Democrats say Fiorina's real legacy in business is the thousands of jobs lost at Hewlett-Packard during the merger she oversaw with Compaq. Democratic officials also contend that she supports policies that are bad for women, including the repeal of President Barack Obama's health care law, which expanded coverage for many preventive services for women.

As for her own political experience, she ran for the U.S. Senate in California in 2010 but was easily defeated by incumbent Democrat Barbara Boxer. She was an adviser to Sen. John McCain's unsuccessful 2008 presidential campaign.

Fiorina remains unknown to many Americans. But Steve DeMaura, executive director of the super PAC Carly for America, said she can use Clinton's presence in the race to "leverage additional attention" for her own candidacy.

So far, Fiorina seems at ease playing the Clinton foil, said David Carney, a longtime New Hampshire political strategist, particularly compared with male candidates who can find it awkward criticizing female politicians — not that the GOP hopefuls have been shy about going after Clinton.

"You see some candidates when they attack a woman come across very badly," said Carney, who is not aligned with a candidate in 2016 but whose wife is working for Fiorina. "But it's not very awkward for Carly. She seems to pull it off very well."

One of Fiorina's biggest challenges may be raising the money she'll need to stay in the race long enough to build up more name recognition. She contributed $5 million of her own money to her Senate campaign, but left behind more than $500,000 of debt.

DeMaura said Fiorina would have to run an "insurgent campaign" that focuses on "surviving to the next round."

"Staying in the race is a big part of the process," he said.