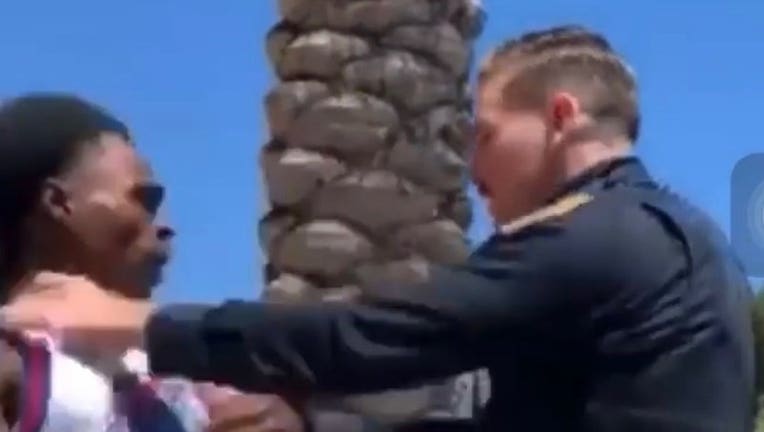 LA MESA, Calif. - A fired Southern California police officer was charged with lying on a police report about the arrest of a Black man who says that his race played a role in the confrontation.

Former La Mesa officer Matt Dages was charged with a felony count of falsifying a police report on the May arrest of Amaurie Johnson, 23, near a trolley station in the San Diego-area city, the San Diego County district attorney’s office announced Monday.

Dages could face up to three years in prison if convicted.

"Dages is accused of falsifying the reason for Johnson’s detention as well as his actions," the DA’s office statement said, although it didn’t provide details.

It wasn’t immediately clear whether Dages had an attorney to speak on his behalf.

In a social media statement, Johnson said he was thankful for the decision to charge Dages and added: "I’ll do my part to make sure there is justice. Tough times don’t last but tough people do."

Dages, who is white, stopped Johnson, who said he was waiting for a friend. Video footage showed Dages shoving Johnson roughly onto a bench before handcuffing him.

Johnson was arrested on suspicion of assault on an officer and resisting, delaying or obstructing an officer but the case never went to trial. The arrest also sparked protests.

Johnson has filed a federal lawsuit against Dages, the city and others alleging he was arrested without probable cause. The suit also alleges negligence, liability, excessive force and violence because of race.

In a statement, La Mesa Acting Police Chief Ray Sweeney said his department has worked with the DA’s office on the matter and "holds each and every member of the department to the highest standards of integrity."

Dages, a three-year veteran, was fired in August and a review panel upheld his firing last month.