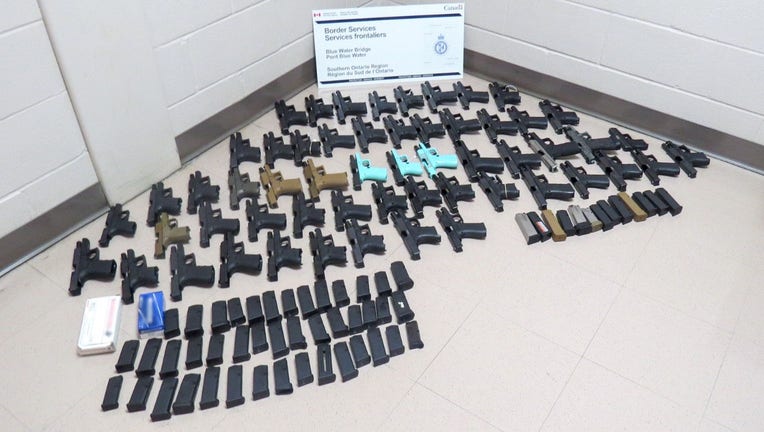 Canadian authorities said a 48-year-old Florida woman was arrested after she tried to smuggle 56 guns into Canada earlier this month.

DETROIT (FOX 2) - A Florida woman is facing charges in Canada after authorities there said she tried to smuggle almost 60 guns into Canada at the Blue Water Bridge in Michigan crossing earlier this month.

The Canada Border Services Agency (CBSA) announced that Vivian Richards was arrested on November 1 after her vehicle was referred for a secondary examination at the Blue Water Bridge port of entry in Point Edward, Ontario.

During that secondary examination, agents reported finding 56 undeclared firearms, 3 over-capacity magazines, 43 ten-round pistol magazines, and 100 rounds of ammunition, located in boxes in the trunk of the car.

The 48-year-old woman from Oakland Park, Florida, was arrested and charged with multiple crimes in Canada including

"This seizure and arrest demonstrate the ongoing commitment of the Canada Border Services Agency to prevent illegal firearms from entering Canada. I am proud of our border services officers, intelligence officers, and investigators who work diligently to stop the smuggling of firearms and keep our communities safe," said Christine Durocher, Regional Director General, Southern Ontario Region.