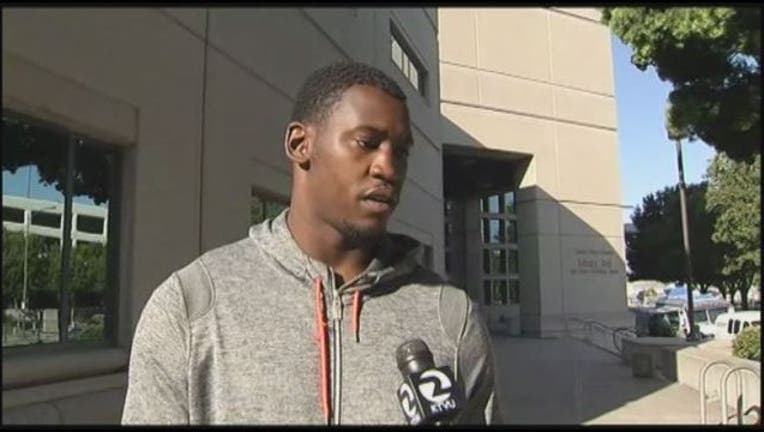 SAN FRANCISCO (BCN) Former Oakland Raider Aldon Smith failed to appear at his
arraignment today in San Francisco Superior Court, prompting a judge to issue a $50,000 warrant for his arrest that would only go into effect if Smith misses his upcoming court date next week.

Smith was set to be arraigned today on three misdemeanor counts of violating a protective order, after he turned himself in on those allegations last Friday.

The restraining order had been placed by a judge on March 12, when Smith was arraigned for domestic violence, false imprisonment, vandalism and assault charges in connection with an alleged domestic violence incident on March 3 at an apartment in Nob Hill in which a woman was injured.

Smith's attorney Joshua Bentley today told the judge that Smith said in a text message that he was parking his vehicle. Bentley also said that in his history of representing Smith, Smith has never missed a court date.

After issuing the warrant with a stay, the judge moved Smith's arraignment on the three counts of violating a protective order to April 5, when he's already scheduled for a pretrial hearing on the previous domestic violence charge, among others. Smith has pleaded not guilty to those charges.

"Domestic violence is something our office is very concerned about," Deputy Public Defender Alex Bastian said outside of court.

"That's why anytime we have an instance of domestic violence we're going to take it seriously, regardless of whether you're a celebrity, an athlete or a politician. All of us need to abide by the rules and we all need to be together on this against domestic violence," Bastian said.

Last week, investigators with the Police Department's Special Victims Unit learned that Smith allegedly violated the order and they obtained a warrant for his arrest, police said.

After turning himself in, Smith was released on $30,000 bail.

In the original March 3 case, police said that officers responded around 8:30 p.m. to the 600 block of Bush Street for a report of domestic violence allegedly involving Smith.

Once officers arrived, Smith had left the scene.

The Raiders released Smith from his contract with them on March 5.

He had previously played for the San Francisco 49ers starting in 2011 but was released by the team in August 2015 following an arrest for a DUI hit-and-run in Santa Clara.