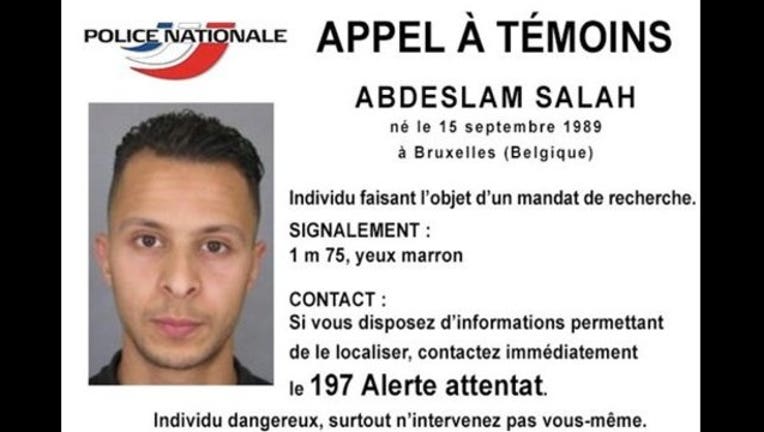 PARIS (AP) - French police raided 168 locations across the country and detained nearly two dozen people as authorities identified more members of a sleeper cell said to be behind the Paris attacks that killed 129 people.

French and Belgian jihadis — and at least one potential Syrian member — were being implicated Monday in what was the worst attack on French soil since World War II. The mastermind is said to be a Belgian national linked to thwarted earlier attacks on a train and a French church.

With France under a state of emergency that gives police special powers, the hunt continued for members of the cell that carried out last Friday's gun and bomb attacks.

French Interior Minister Bernard Cazeneuve said police arrested 23 people and recovered a Kalashnikov and other weapons during the overnight raids.

Heavily armed Belgian police also launched a major operation in the Molenbeek neighborhood of Brussels, which authorities consider to be a focal point for extremists and fighters going to Syria from Belgium.

Across France and throughout Europe, people paused for a minute's silence at noon French time (1100GMT) in memory of the victims.

Overnight, France launched its heaviest airstrikes yet on the Islamic State group's de-facto capital in Syria, Prime Minister Manuel Valls said "we are at war" against terrorism.

French authorities say Sunday night's airstrikes destroyed a jihadi training camp and a munitions dump in the city of Raqqa, where Iraqi intelligence officials say the attacks on Paris were planned.

Twelve aircraft including 10 fighter jets dropped a total of 20 bombs in the biggest air strikes since France extended its bombing campaign against the extremist group to Syria in September, a Defense Ministry statement said. The jets launched from sites in Jordan and the Persian Gulf, in coordination with U.S. forces.

Three teams of attackers including seven suicide bombers attacked the national stadium, the concert hall and nearby nightspots Friday. In addition to those killed, the attacks wounded 350 people, 99 of them seriously.

French authorities have identified several suspected attackers, most with links to France or Belgium.

A French official identified the suspected mastermind as Belgian Abdelhamid Abaaoud, who is said to be linked to the thwarted attacks on a Paris-bound high-speed train and a Paris area church earlier this year. The official has direct knowledge of the investigation but is not authorized to be publicly identified as speaking about the probe.

As efforts were being made to capture those behind the attacks, more details have emerged of those who carried them out.

The Paris prosecutor's office said Monday one of the suicide bombers who blew himself up in the Bataclan music hall Friday night was Samy Amimour, a 28-year-old Frenchman charged in a terrorism investigation in 2012. Amimour was placed under judicial supervision, but dropped off authorities' radar in 2013 and an international arrest warrant was issued.

An attacker who blew himself up outside the national soccer stadium was said to have been found with a Syrian passport with the name Ahmad Al Mohammad, a 25-year-old born in Idlib. The prosecutor's office said fingerprints from the attacker match those of someone who passed through Greece in October.

Another, said to have been identified by the print on a recovered finger, was 29-year-old Frenchman Ismael Mostefai, who had a record of petty crime and had been flagged in 2010 for ties to Islamic radicalism.

A judicial official said police have also identified two other suicide bombers, both French nationals who'd been living in Belgium: 20-year-old Bilal Hadfi, who detonated himself outside the Stade de France; and 31-year-old Brahim Abdeslam, who blew himself up on the Boulevard Voltaire.

At least one key suspect is on the loose. The arrest warrant for 26-year-old Salah Abdeslam — brother of bomber Brahim — describes him as very dangerous and warns people not to intervene if they see him.

French officials revealed to The Associated Press that police already had him in their grasp early Saturday, when they stopped a car carrying three men near the Belgian border. By then, hours had passed since authorities identified Abdeslam as the renter of a Volkswagen Polo that carried hostage takers to the Paris theater where so many died.

Three French police officials and a top French security official confirmed that officers let Abdeslam go after checking his ID. They spoke on condition of anonymity, lacking authorization to publicly disclose such details.

The Islamic State group has claimed responsibility for the attacks. Its statement mocked France's air attacks on suspected IS targets in Syria and Iraq, and called Paris "the capital of prostitution and obscenity."

Tantalizing clues about the extent of the plot have emerged from Baghdad, where senior Iraqi officials told the AP that France and other countries had been warned on Thursday of an imminent attack.

An Iraqi intelligence dispatch warned that Islamic State group leader Abu Bakr al-Baghdadi had ordered his followers to immediately launch gun and bomb attacks and take hostages inside the countries of the coalition fighting them in Iraq and Syria.

The Iraqi dispatch, which was obtained by the AP, provided no details on when or where the attack would take place, and a senior French security official told the AP that French intelligence gets these kinds of warnings "all the time" and "every day."

However, Iraqi intelligence officials told the AP that they also warned France about specific details: Among them, that the attackers were trained for this operation and were sent back to France from Raqqa, the Islamic State's de-facto capital.

The officials also said a sleeper cell in France then met with the attackers after their training and helped them to execute the plan. There were 24 people involved in the operation, they said: 19 attackers and five others in charge of logistics and planning.

None of these details have been corroborated by officials of France or other Western intelligence agencies.

All these French and Iraqi security and intelligence officials spoke with the AP on condition of anonymity, citing the ongoing investigation.

The identification of several French suspects stoked fears of homegrown terrorism in France, which has exported more jihadis than any other in Europe, and seen many return from the fight. All three gunmen in the January attacks on the Charlie Hebdo newspaper and a kosher supermarket in Paris were French.

In the worst of Friday's attacks, gunmen stormed the Bataclan theater during a rock concert, taking the audience hostage and firing on them repeatedly. Eighty-nine people were killed and many more wounded.

Julien Pearce, a journalist at Europe 1 radio who escaped by crawling onto the stage, said he got a good look at one attacker who appeared "very young."

Refugees fleeing war by the tens of thousands fear the Paris attacks could prompt Europe to close its doors, especially after police said a Syrian passport found next to one attacker's body suggested its owner passed through Greece into the European Union and on through Macedonia and Serbia last month.

Paris remains on edge amid three days of official mourning. French troops have deployed by the thousands and tourist sites remain shuttered in one of the most visited cities on Earth. Panic ensued Sunday night as police abruptly cleared hundreds of mourners from the famed Place de la Republique square, where police said firecrackers sparked a false alarm.

"Whoever starts running starts everyone else running," said Alice Carton, city council member who was at the square. "It's a very weird atmosphere. The sirens and screaming are a source of fear."