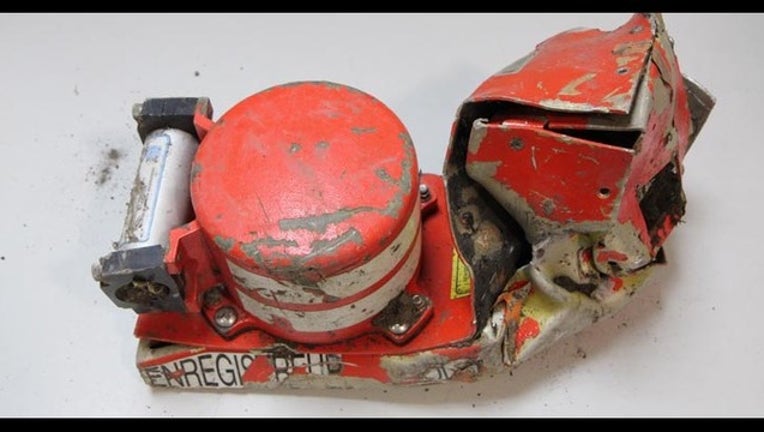 SEYNE-LES-ALPES, France (AP) — French investigators cracked open a mangled black box and extracted audio from its cockpit voice recorder Wednesday, but gleaned no explanation for why a German plane dropped unexpectedly and smashed into a rugged Alpine mountain, killing all 150 on board.

The orange cockpit voice recorder — dented, twisted and scarred by the impact — is considered the key to knowing why the pilots of Germanwings Flight 9525 lost radio contact with air traffic controllers over the French Alps then crashed Tuesday during a routine flight from Barcelona to Duesseldorf.

Three Americans were presumed dead in the plane crashin the southern French Alps, including a U.S. government contractor and her daughter, the State Department said Wednesday.

Identified victims were Yvonne Selke of Nokesville, Virginia, an employee for 23 years at Booz Allen Hamilton Inc. in Washington, and her daughter, Emily Selke, a recent graduate of Drexel University in Philadelphia. The U.S. government did not identify the third American it said was on the plane.

Yvonne Selke performed work under contract with the National Geospatial-Intelligence Agency, the Pentagon's satellite mapping office, Booz Allen and the Defense Department confirmed in statements after the AP had reported her identity and employment.

"Every death is a tragedy, but seldom does a death affect us all so directly and unexpectedly," NGA Director Robert Cardillo said. "All of us offer our deepest condolences and will keep her family and her colleagues in our thoughts."

Booz Allen's chief personnel officer, Betty Thompson, described Selke as "a wonderful co-worker and a dedicated employee who spent her career with the firm."

Friends and co-workers of Selke's circulated a photograph of her showing a smiling, middle-aged woman with brown hair and eyeglasses, and a photo of Emily showing a blond young woman with dark eyes and a bright smile. They described Selke as a diligent and generous worker who regularly brought cookies to co-workers.

A person who answered the phone at Selke's home said the family was not providing any information.

Drexel University said in a statement that Emily Selke graduated with honors in 2013 and was a music industry major. Her sorority at Drexel, Gamma Sigma Sigma, said in a statement on its Facebook page with a photo of Emily that it was mourning her loss and said she "always put others before herself and cared deeply for all those in her life."

State Department spokeswoman Jen Psaki said the U.S. was reviewing records to determine whether any other U.S. citizens might have been on board the flight.

Remi Jouty, director of the French aviation investigative agency, said an audio file was recovered by Wednesday afternoon, including sounds and voices. But he said it was too early to draw any conclusions from the recorder, which takes audio feeds from four microphones in the cockpit and records all the conversations between the pilots, air traffic controllers as well as any noises.

Jouty said the plane was flying "until the end" and was at 6,000 feet (1,820 meters) when it smashed into the mountainside, well below its previous cruising altitude of 38,000 feet. He said the final communication from the plane was a routine message about permission to continue on its route. He would not speculate on possible causes of the crash or rule anything out.

French President Francois Hollande, meanwhile, said the case for the plane's second black box had been found but not its contents. Jouty refused to confirm that about the flight data recorder, which captures 25 hours' worth of information on the position and condition of almost every major part in a plane.

"At this moment people are on the scene still searching," Hollande said, speaking alongside German Chancellor Angela Merkel and Spanish Prime Minister Mariano Rajoy in Seynes-les-Alpes, the town nearest to the crash site. Most of the plane's victims were German and Spanish.

"This is a true tragedy, and the visit here has shown us that," Merkel said.

Hollande promised that French investigators would do everything to determine the crash's cause.

Helicopters surveying the plane's scattered debris lifted off at daybreak for a look at the craggy ravine while emergency crews hiked through snow and rain over the steep, rocky terrain to the high-altitude crash site. In all, more than 600 rescue workers and aviation investigators were in the area, French officials said.

The crash left pieces of wreckage "so small and shiny they appear like patches of snow on the mountainside," Pierre-Henry Brandet, the Interior Ministry spokesman, said after flying over the debris field.

Investigators were zooming in on two key minutes Tuesday — 10:30-10:31 a.m. — said Segolene Royal, a top government minister whose portfolio includes transport. From then on, air traffic controllers were unable to make contact with the plane.

German Interior Minister Thomas de Maiziere told reporters in Berlin "there is no hard evidence that the crash was intentionally brought about by third parties."

The plane, operated by Germanwings, a budget subsidiary of Lufthansa, was less than an hour from landing in Duesseldorf when it unexpectedly went into a rapid, eight-minute descent. The pilots sent out no distress call, France's aviation authority said.

Lufthansa CEO Carsten Spohr, himself a pilot, said he found the crash of a plane piloted by two experienced captains "inexplicable."

The four possible causes of any crash are human error, mechanical problems, weather, criminal activity or a combination of two or more. Investigators will use the cockpit voice and flight data recorders to map out and focus their work, said Alan E. Diehl, a former air safety investigator with the National Transportation Safety Board.

"Both will point you in directions of what is critical," Diehl says. "Based on what you learn from the recorders, you might focus on key pieces of wreckage."

"You're usually dealing with a jigsaw puzzle with many of the pieces missing," he says. "You start eliminating things that didn't happen."

Lufthansa said two charter flights to France will be made available for family members who want to get as close as they can to the crash site. Locals in Seyne-les-Alpes offered to host the bereaved families due to a shortage of rooms to rent.

Germanwings itself cancelled several flights Wednesday because some crews declared themselves unfit to fly after losing colleagues.

"The management completely understands this, because we are a small family. Everyone knows everybody inside Germanwings, so it is a big shock for employees," said CEO Thomas Winkelmann.

He said the company had already contacted most families of the victims and was trying to reach the rest. He said victims included 72 German citizens, 35 Spaniards, two people each from Australia, Argentina, Iran, Venezuela and the U.S. and one person each from Britain, the Netherlands, Colombia, Mexico, Japan, Denmark, Belgium and Israel.

Some could have dual nationalities, for Spain's government said 51 citizens had died in the crash.

The victims included two babies, two opera singers, an Australian mother and son vacationing together, and 16 German high school students and two teachers returning from an exchange program in Spain.

The principal of Joseph Koenig High School, Ulrich Wessel, called the loss of 16 of his students and two teachers — one who had just gotten married and another who was soon to be — a "tragedy that renders one speechless."

"Nothing will be the way it was at our school anymore," he said.

Paul Andrew Bramley, a 28-year-old from Britain, had been studying hospitality and hotel management in Lucerne and was flying to meet his mother before starting an internship on April 1.

"He was the best son. He was my world," said his mother, Carol Bramley.

In Spain, flags flew at half-staff on government buildings and a minute of silence was held in government offices across the country. Parliament canceled its Wednesday session.