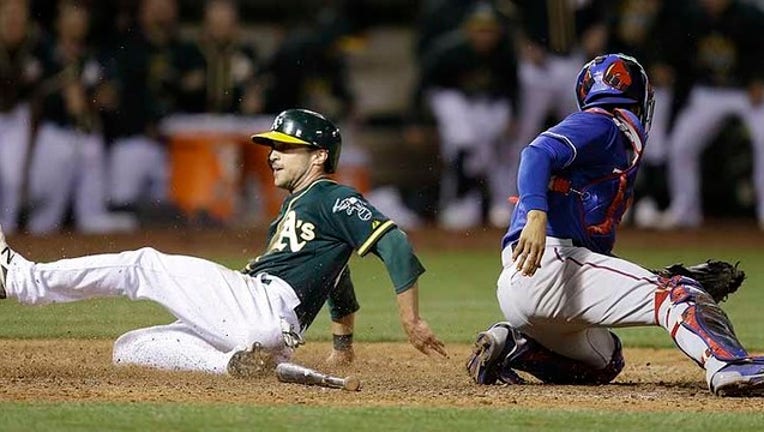 OAKLAND, Calif. (AP) — For one night in a rough season, Sam Fuld and the Oakland Athletics enjoyed some of that old walkoff magic that used to define this club.

Fuld slid into home to just beat the throw for the winning run with one out in the ninth on Josh Reddick's grounder, and the A's snapped a four-game losing streak with a 5-4 victory against the Texas Rangers on Wednesday night.

"We used to specialize in those here for quite a while," manager Bob Melvin said. "It was nice to be able to come back from 4-2 to tie it, then come back and score another run. It was a good feeling."

Reddick received one of those celebratory whipped cream pies in the face he has regularly doled out in recent years.

"We were long overdue for a walkoff," Fuld said. "Those are the best kinds of wins. Good teams get a lot of walkoff wins, and we were definitely in desperate need of one."

Fuld was overdue for a hit, period.

He hit a one-out single off Keone Kela (4-3) for just his eighth hit in 80 at-bats and stole second. Fuld advanced on Billy Burns' infield single and shortstop Elvis Andrus held the ball rather than throwing to third.

"It got a little tough for us. We put ourselves in a couple of tight spots," Rangers manager Jeff Banister said. "We ran into some outs on the bases, we got picked off, we missed a cutoff. It wasn't the cleanest game but it was still one I thought we had a chance to win. More than anything, it was missed opportunities to add on."

Tyler Clippard (1-3) pitched a perfect ninth for the win.

Gallardo overcame a 30-pitch first inning that put him in a 1-0 hole and got stronger late. He struck out the side in order in the sixth to give him four straight Ks. He reached double digit strikeouts for the 19th time in his career and first since Sept. 19 at Pittsburgh.

Mitch Moreland hit a pair of RBI singles as Texas lost for only the 13th time on the road.

Hahn plunked Choo in the right upper back to load the bases with none out in the third. Prince Fielder followed with a sacrifice fly.

Hahn also hit Leonys Martin in the third and Fielder in the fourth. The three hit batsmen matched an Oakland record done eight times previously and first since Barry Zito on April 15, 2005.

He pitched two more scoreless innings — going 1-2-3, right-left-right in the sixth that ended with a strikeout of Fielder.

In the first, the A's challenged that Delino DeShields was safe at first on a pickoff attempt. The call was overturned on review in 50 seconds. DeShields led off the game by reaching on shortstop Marcus Semien's 20th error — also Oakland's majors-leading 58th error.

Rangers: LHP Martin Perez made his first rehab start since Tommy John elbow ligament replacement surgery in spring 2014. He went 2 2-3 innings for Double-A Frisco, allowing five hits and one run with four strikeouts and no walks. ... 1B/OF Kyle Blanks, out following a procedure for a cyst in his tailbone area, could be activated as soon as Thursday.