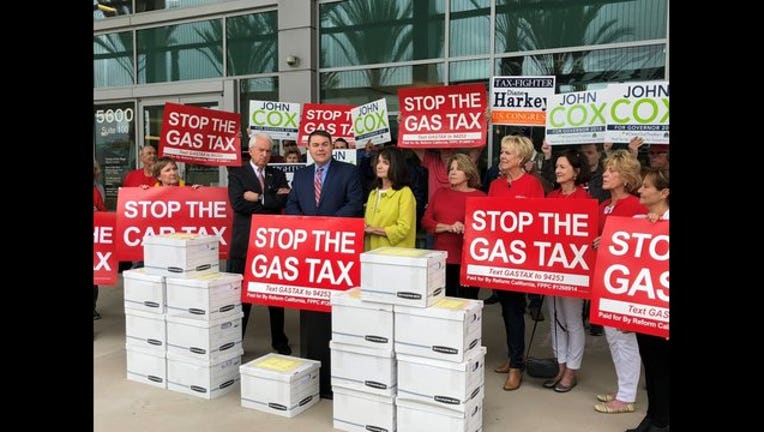 SACRAMENTO, Calif. (AP) - An effort by California conservatives to repeal a recent increase in gas taxes and vehicle registration fees ramped up Monday as the supporters turned in more than 940,000 signatures to put the question before voters in November.

The signatures were submitted days after California transportation officials pre-emptively fought back, announcing billions of dollars in mass transit improvements funded in part by the tax hikes. It sets up an election showdown over the condition of California's roads and its high gas prices.

The initiative is a key part of the 2018 election strategy for Republicans, who face the prospect of having no candidates for governor or U.S. Senate at the top of the ticket and Democrats highly motivated by opposition to President Donald Trump. Much of the funding for the initiative has come from the California Republican Party and members of the congressional delegation.

About two dozen people held bright red and white signs that read "Stop The Car Tax" and "Stop The Gas Tax" in front of the San Diego Registrar of Voters building on a cool cloudy day.

Carl DeMaio, a conservative San Diego radio host who led the repeal drive, warned the gas tax will cost Democrats seats in the Legislature. The large number of signatures gathered should be "a wake-up call," he said.

Lawmakers last year approved SB1, which raised gas taxes by $0.12 per gallon and diesel taxes by $0.20 starting last November. Drivers renewing their vehicle registration this year are paying a new fee between $25 and $175 depending on the value of the vehicle. And in 2020, zero-emission vehicle owners will be charged a $100 fee with their vehicle registration since they do not contribute to road maintenance through gas taxes.

The initiative would repeal SB1 and require voter approval for any future gas taxes or vehicle registration fees.

"This ballot measure would jeopardize public safety by eliminating funding for vital highway, road and bridge safety improvements across California. It's dangerous and must be defeated," said Doug Villars, president of the California Association of Highway Patrolmen, part of a coalition of labor unions, construction contractors and local governments opposing the initiative.

Gov. Jerry Brown's administration last week awarded $2.6 billion in funding for transit and intercity rail projects in Southern California, the San Francisco Bay Area and the Central Valley. Brown was the driving force behind SB1 and his administration has aggressively promoted the roadway and transit improvements that it will fund. The various tax hikes are projected to raise about $5 billion per year.

A Public Policy Institute of California poll in January found that voters were deeply divided, with 47 percent supporting repeal and 48 percent opposed.

Most of the 940,000 signatures were collected in Southern California. At least 585,407 of the signatures must be valid for the initiative to qualify for the ballot.

Republican gubernatorial candidate John Cox denied it is a strategy to spur voters in the left-leaning state to come out in November but said at a press conference that California spends more than other state to build a mile of road.

"We're going to send the message that that corruption and that waste has got to end and it will be ending in November when we elect a new governor who will use the resources wisely in this state," he said.

Whether Republicans can successfully use the initiative to juice turnout is "very much an open question," said Jack Pitney, a professor of politics at Claremont McKenna College.

"The question is whether the sentiment is strong enough to motivate turnout by people who might not otherwise vote," Pitney said.