The family of British socialite Ghislaine Maxwell has sent a letter to Attorney General Merrick Garland asking for better jail conditions during her trial for sex trafficking.

NEW YORK - The family of the British woman charged with helping the late sex offender Jeffrey Epstein exploit underage girls has asked the U.S. attorney general to improve the treatment she is receiving during her trial "in the interest of justice and common humanity."

Ghislaine Maxwell’s family have written to Attorney General Merrick B. Garland requesting that authorities stop using four-point restraints to shackle her hands, waist and feet when she is moved from a holding cell to the courtroom, and that she receive a food pack and a bar of soap each day. The family also asked that she be allowed to meet with her attorneys for at least 30 minutes before and after each day’s proceedings.

The restraints cause bruising, broken skin and other "unnecessary trauma," the family said in a statement obtained by The Associated Press. They also complained that she received "minimal sustenance" during the first week of her trial, had no access to soap or hand sanitizer despite the risk of COVID-19 and was only allowed to confer with her attorneys in areas where they were likely to be heard by prosecutors.

The woman who took the witness stand said she met Ghislaine Maxwell at age 17 through a friend of hers she had dated on and off, and was eager to be friends with the British socialite.

"Ghislaine’s physical welfare and her right to have proper and timely access to her counsel during the trial have been entirely overlooked,’’ the family said. "On behalf of their sister, her brothers and sisters urge Attorney Garland to intervene immediately today to grant the simple, fair and just remedies requested.’’ 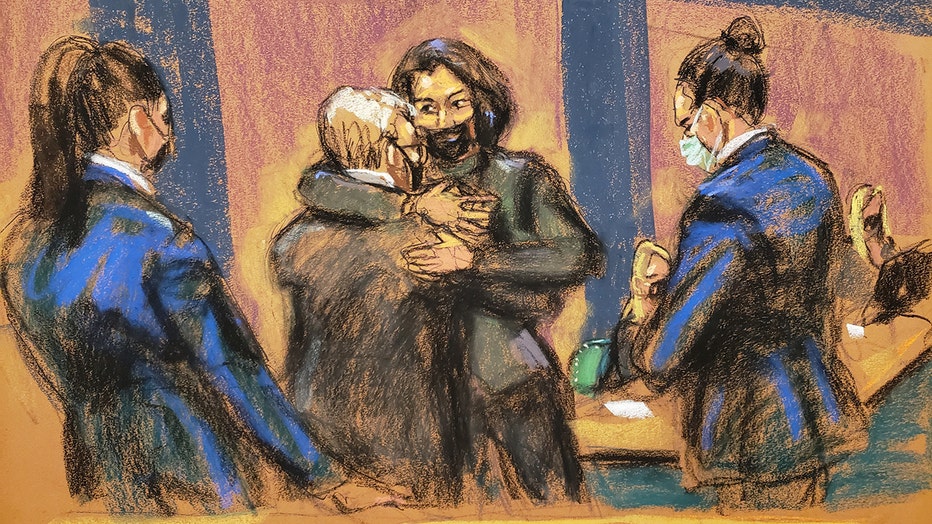 Federal prosecutors allege Maxwell, 59, groomed girls as young as 14 to have sex with Epstein and lied about her knowledge of his crimes when she testified in an earlier case. Her trial began Nov. 29 in U.S. District Court in Manhattan.

Maxwell and her family have repeatedly complained about the conditions under which she has been held for the past 17 months, saying they were damaging her health and preventing her from mounting an adequate defense. Judge Alison J. Nathan has rejected several requests for bail, citing concerns that Maxwell could flee.

Jurors in the sex-trafficking trial of Ghislaine Maxwell were shown massage tables, sex toys, and more.

Her family said they are now going directly to Garland because he has ultimate responsibility agencies involved in their sister’s custody and transportation, including the U.S. Marshals Service and the Bureau of Prisons.

Garland should intervene "in the interest of justice and common humanity to change the shocking daily regime which Ghislaine is subject to during her trial," the family said.

RELATED: Who is the real Ghislaine Maxwell: Epstein enabler or pawn?