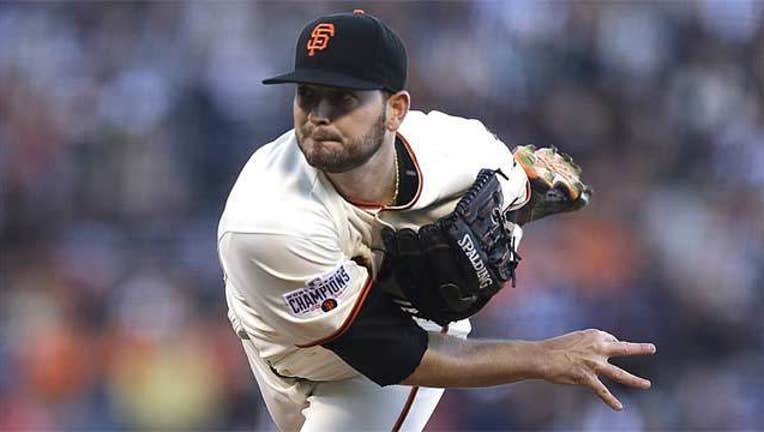 SAN FRANCISCO — Giants rookie Chris Heston had another strong outing against the New York Mets, nearly one month after shutting them down completely while throwing the first no-hitter in the majors this season.

San Francisco’s bullpen was another story altogether, continuing a troubling pattern for the defending World Series champions — who have dropped seven straight.

Sergio Romo gave up two runs in the ninth inning and closer Santiago Casilla was touched up for another, spoiling a stellar performance from Heston in a 3-0 loss to the Mets on Monday night.

“The bullpen is struggling a little bit,” manager Bruce Bochy said. “That’s something that we’ve been so good at. Right now they’re having a hard time.”

Johnny Monell snapped a scoreless tie against his former team with a two-run double off Romo in the ninth. Michael Cuddyer had two hits, including a single that started the winning rally, to help the Mets improve to 3-1 on a six-game West Coast trip.

It was New York’s second consecutive shutout, including an 8-0 victory Sunday at Dodger Stadium behind rookie Steven Matz.

“We don’t play well on the West Coast, so to get off to a great start on this road trip is huge for us,” manager Terry Collins said. “It looks like we’re starting to get some breaks.”

Juan Lagares added an RBI single off Casilla to make it 3-0, and Jeurys Familia closed for his 23rd save. Mets pitchers have allowed exactly three hits in each of their last three wins.

“We definitely have to tighten up this bullpen and get back to who we are,” Bochy said. “The long ball’s been killing us. Today they just got base hits. They threw out good at-bats against our late-inning guys.”

Heston, who pitched a no-hitter against the Mets on June 9 in New York, gave up three hits in 7 1-3 shutout innings. He walked four and struck out two.

The right-hander was pulled after hitting Lagares with a pitch and walking Ruben Tejada sandwiched around a forceout on a ball that fell amid three players in short left field. Gregor Blanco threw to second to force Lagares.

“I wish I would have not walked so many people and just tightened the zone a little better,” Heston said. “Other than that I thought it went pretty well.”

The Giants might have been tired after altering their travel schedule and arriving in the Bay Area at 12:30 p.m. on Monday. They stayed overnight in Washington after playing the Nationals on Sunday night.

San Francisco managed only three singles. Two came from Joaquin Arias, who was making a rare start at second base in place of All-Star reserve Joe Panik.

Jonathon Niese (4-8) pitched eight sharp innings and retired 15 of his first 16 batters before running into a little bit of trouble in the sixth. The Giants loaded the bases with two outs after Arias singled and Ehire Adrianza and Matt Duffy walked.

Niese retired All-Star slugger Buster Posey on a grounder to third to end the threat.

“We’re sputtering,” Bochy said. “We had five runs the last series, we got shut out today. That’s not going to work.”

Mets: Right-handed reliever Jenrry Mejia made his final rehab appearance Sunday and is expected to be activated in time for Tuesday night’s game. Mejia completed his 80-game suspension for testing positive for performance-enhancing drugs.

Giants: OF Hunter Pence (soreness in left wrist) took batting practice the past two days, and Bochy said Pence could return this week.

Mets: RHP Bartolo Colon (9-6, 4.55 ERA) threw seven shutout innings in his last start. Colon is 2-2 with a 5.46 ERA in five starts against the Giants. He has not won in San Francisco in three years.

Giants: RHP Matt Cain (0-1, 9.00) will make his second start of the season Tuesday night. He made his first start in nearly a year on Thursday, taking the loss against Miami. Cain is winless in his last four starts against the Mets and is looking for his first win against them in four years.