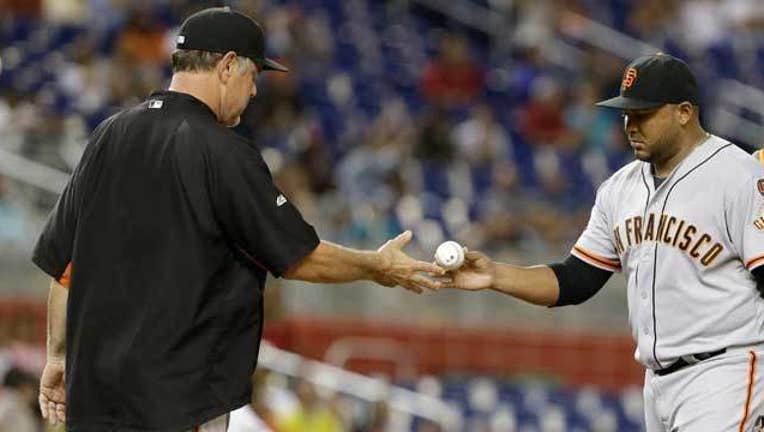 MIAMI (AP) — The San Francisco Giants ended June the way they started it — with a loss.

A 5-3 defeat at Miami left the Giants with a 12-14 record for the month. Even so, manager Bruce Bochy said, it could have been worse for the injury-plagued World Series champions.

"I'm not happy with it, but we're trying to hold ground here," Bochy said. "We're not playing with a full deck right now. To almost have a .500 month, that's not bad."

Buster Posey hit his 12th homer for the Giants, who will get Matt Cain and Jake Peavy back in the rotation in consecutive starts Thursday and Friday. Hunter Pence and Nori Aoki are among others on the disabled list.

Despite the injuries, the Giants are in second place in the NL West.

"You've got to be happy with where we are right now," Posey said. "Hopefully getting Hunter back and Nori, hopefully not too far after, will be a big boost for us."

Ryan Vogelsong (6-6) went six innings, threw 88 pitches and allowed four runs, with all of them scoring on homers.

"It's tough to take," he said. "How many pitches did I throw? And you think about two. I just left the ball up a little bit."

Gordon, who came into the game leading the majors with 112 hits, made use of his speed for his first homer of the year. Right fielder Gregor Blanco chased the ball down in the gap just short of the wall and tried to flip it with his glove behind his back to center fielder Angel Pagan, but they missed connection.

"I was just trying to flip the ball to Angel so hopefully he could stop him at third," Blanco said. "That was the only chance."

Gordon kept running and scored easily with a headfirst slide.

"Anytime he hits the ball in the gap like that, he's got a chance," Vogelsong said. "He's fast."

Posey homered in the third, giving him 18 RBIs in the past 10 games. He doubled and scored on a two-out wild pitch by Mat Latos in the sixth to make it 4-3.

A.J. Ramos followed with a perfect ninth for his 11th save. He was helped by a terrific play from Bour, who did a face plant at first catching third baseman Miguel Rojas' throw to rob Andrew Susac of a hit.

Giants RHP Chris Heston, a native of Palm Bay, Florida, received the key to the city from the mayor before the game. The ceremony was to honor Heston for his no-hitter June 9 against the Mets.

Pence (left wrist) hit off a tee with a fungo bat for the first time since his injury.