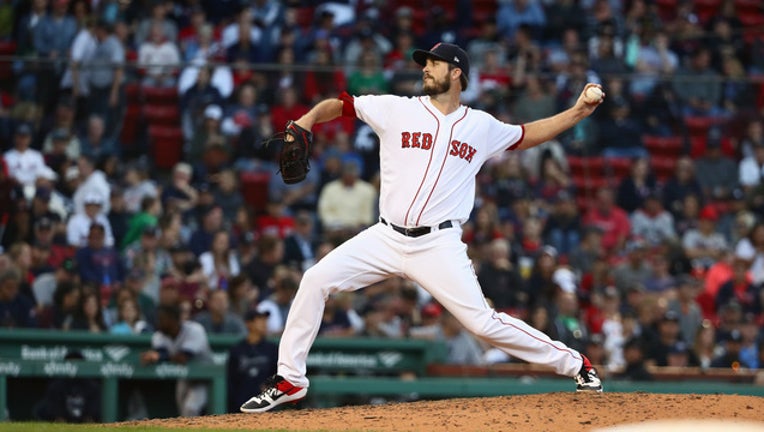 Drew Pomeranz pitches for the Boston Red Sox against the New York Yankees at Fenway Park on Sept. 30, 2018. Pomeranz agreed to a 1-deal with the Giants worth $1.5 million on Wednesday. Jan. 23, 2019. (Photo by Omar Rawlings/Getty Images)

SAN FRANCISCO (AP) - Left-hander Drew Pomeranz has agreed Wednesday to a $1.5 million, one-year contract with the San Francisco Giants, a deal that includes $3.5 million in possible roster and performance bonuses.

He is very familiar with the NL West, having pitched for Colorado and San Diego, and also knows the Bay Area. He spent the 2014-15 seasons with Oakland.

Pomeranz pitched the past three years with Boston. He won a career-high 17 games for the Red Sox in 2017. But he went 2-6 with a 6.08 ERA last season and was limited to 11 starts and 26 appearances for the World Series champions because of two stints on the disabled list - first with a strained left forearm followed by biceps tendinitis in his pitching arm.

He did not pitch in the World Series but was on the roster. If he can stay healthy, Pomeranz gives the Giants a reliable arm in the rotation after two injury-plagued years by starters Madison Bumgarner, Johnny Cueto and Jeff Samardzija.