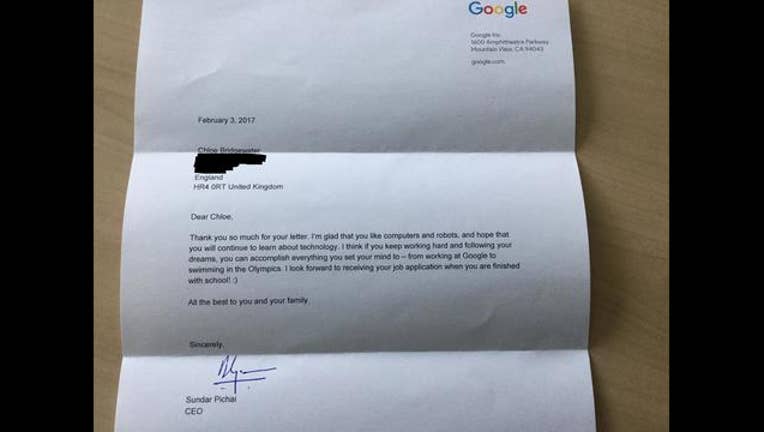 A photo of the letter from Google's CEO was posted on LinkedIn by Chloe's dad, which has since gone viral. (Photo: LinkedIn / Andy Bridgewater)

Chloe Bridgewater, who lives in Hereford, England, reportedly wrote a letter to Google to see if they would give her a job -- and she got a response she'll remember forever.

The letter, shared by her father and published on Business Insider, begins with "Dear Google Boss" and goes on to make a pretty good case.

"My name is Chloe and I would like a job with Google. I also want to work in a chocolate factory and do swimming in the Olympics."

She goes on to say, "My dad said I can sit on bean bags and go down slides and ride go-karts in a job in Google."

She goes on to list her interests and skills: "I like computers too and have a tablet I play games on."

"My dad told me to give you an application to get a job in Google. I don't really know what one of them is but he said a letter will do for now."

She concludes with, "Thank you for reading my letter. I have only ever sent one other and that was to Father Christmas. Good bye."

To her surprise, the 7-year-old received a signed letter from the company's CEO, Sundar Pichai. Her father posted a photo of Pichai's response on LinkedIn and Twitter, which has since gone viral.

Google confirmed to Mashable the letters between the CEO and young girl are real.

"She lost a great deal of confidence after being knocked down by a car a couple of years ago," Chloe's father, Andy Bridgewater, writes. "However, to say she is delighted after receiving this letter signed by Sundar Pichai himself is an understatement. She is now even more eager to do well at school and work for Google."