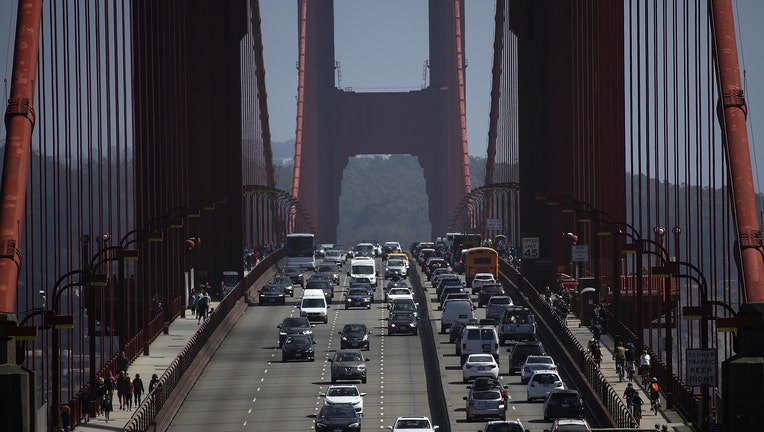 SAUSALITO, CA - AUGUST 02: Cars drive over the Golden Gate Bridge on August 2, 2018 in Sausalito, California. On Thursday, the Trump administration announced a proposal to weaken fuel-efficiency requirements for the nation's cars and trucks. The roll

SAN FRANCISCO - Though California has been officially reopened for more than a month, travel over and under the Golden Gate Bridge by bus and ferry is still lagging far behind its pre-pandemic levels.

In a Friday meeting of the Golden Gate Bridge, Highway and Transportation District Board of Directors, the board discussed causes of and solutions to the lack of traffic.

Despite the overall lag, the district's general manager Denis Mulligan said customer survey results indicated most customers will resume using regular bus and ferry transportation by December when businesses shift away from remote work. During Friday's meeting, Mulligan explained that weekday travel on the bridge has taken a particular hit.

"During the morning commute periods from 5 a.m. to 9 a.m., bridge traffic is down almost 40 percent" from pre-pandemic levels, Mulligan said. "Our busiest bus trip -- single trip crossing the bridge southbound in the morning commute -- has only 16 passengers on it."

Overall traffic, however, is only down 20 percent, according to Mulligan. Much of the difference gets made up on weekends, when people travel into the city for recreational trips or to watch baseball games at Oracle Park.

As a result, the district has resumed closing Vista Point and the Welcome Center parking lots during the day on Saturdays, Sundays and major holidays to prevent vehicles looking for parking spots causing traffic congestion and delays.

In line with decreased traffic, the district has also seen lower, but slowly increasing, revenues from buses, ferries and bridge tolls, Mulligan said. Over the week of the Fourth of July holiday, the district's revenues were $1.3 million lower than the same week in 2019.

Mulligan highlighted the free rides offered on the holiday weekend as a successful step in encouraging Bay Area travelers to return to using ferries and buses as COVID-19 safety precautions loosen. Board member Dick Grosboll asked the board to consider more marketing efforts in the future to bring back customers, but Mulligan pushed back on the idea, arguing commuters can't be convinced to take public transportation to work again while their workplaces remain closed.

The decreased traffic also isn't a matter of safety concerns, he said, citing that less than 2 percent of customers surveyed had concerns about security or safety despite rising case numbers in the state and the spread of the more contagious delta variant.

In the future, the district plans to expand its services to Angel Island and is negotiating to take over midday and weekend services to Tiburon.

"Until employers welcome employees back to downtown San Francisco, our numbers will remain low," he said.