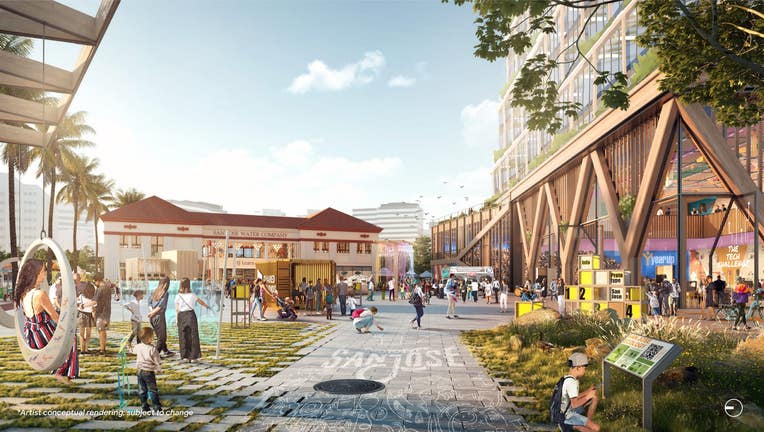 SAN JOSE, Calif. - San Jose revealed scads of new details about Google's plans to build a sprawling downtown campus with 7.3 million square feet of office space and 4,000 housing units spread out over more than 80 acres with improvements to public amenities, including 10 parks and the trails that will eventually connect them all.

San Jose Downtown Association Executive Director Scott Knies said the project represents a "higher level of design development than the city has ever seen before." 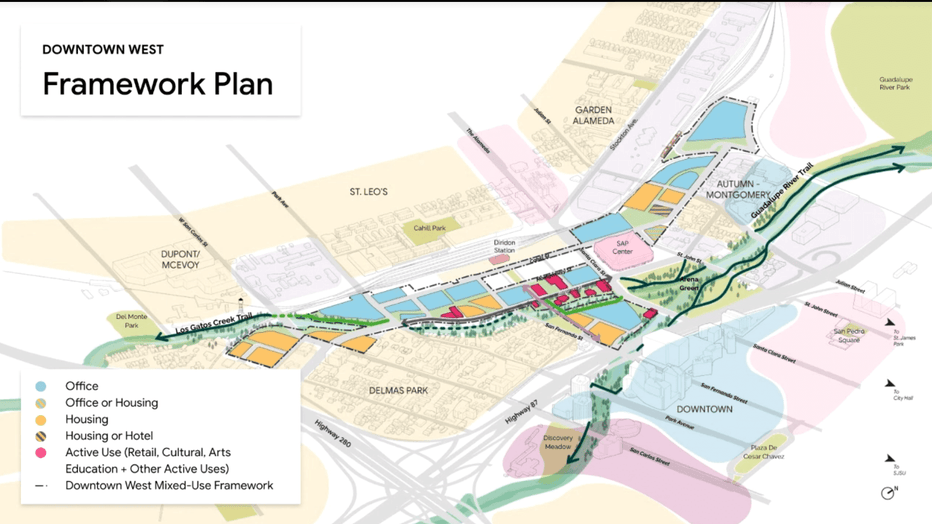 "They will be good stewards and work toward the 25 percent
affordable goal," he said.

As part of a public comment process, the city released hundreds of pages in two documents on Wednesday. The first, an environmental impact report (EIR), examines the effects the project will have on air and water quality, energy use, greenhouse gas emissions and other environmental concerns.

The second document, Downtown West Design Standards and Guidelines (DWDSG), which is more than 470 pages long, contains a wide array of design specifications and illustrations that paint a vivid portrait of what the tech giant has planned for the future of downtown. 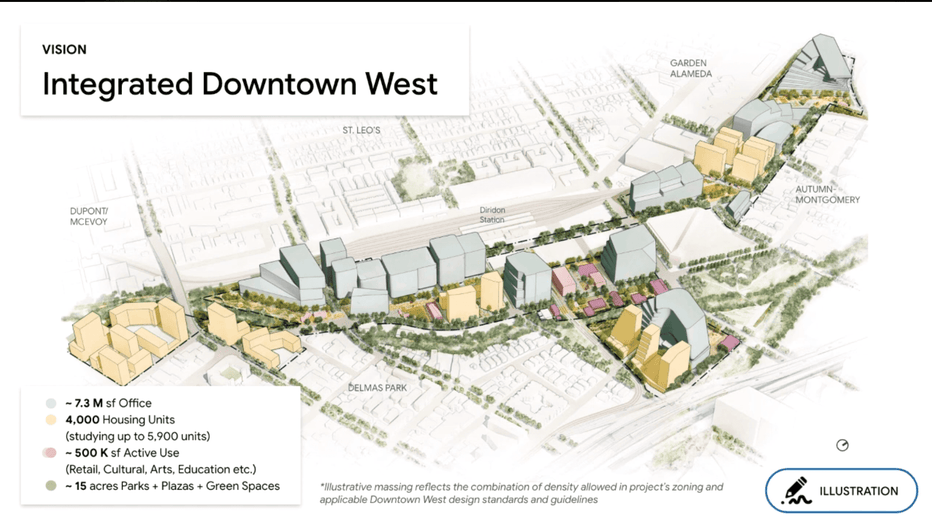 The project will transform the face of the city, and officials say
San Jose has been partnering with Google to develop the property in a way that best serves the public interest.

"Particularly amid all the challenges of this pandemic, I'm grateful for the persistent collaboration between Google and city staff to
enable our community to benefit from thousands of jobs, affordable apartments, vibrant retail and restaurants, public plazas, and park space," said Mayor Sam Liccardo.

Trying to parse the details of the 1,350-page EIR, which was
posted on the city's website, is like "drinking from a fire hose," Staedler said.

Nevertheless, Staedler told San Jose Spotlight the start of the
public comment process on the document was an important step forward for the project.

"This is the beginning of a myriad of Google items that will go to
the council between now and the end of the year," Staedler said, noting a handful of committees will meet and take public comment on the project before the council is asked to approve it in 2021.

"Google listens to community input and they actually want to be
partners with the community," he added.

The company echoed that sentiment. Indeed, the draft EIR is the
product of a long process of public engagement.

"We're excited about this next step in our project, which
incorporates feedback from thousands of people over the last two years and provides another opportunity for community input," Alexa Arena, Google's development director for San Jose, said. "We continue to hear that housing and preserving affordability is a priority for San Jose and our proposal offers more affordable housing, job pathways, and community spaces for San Joseans."

Knies noted Google is planning a development that belongs in San
Jose's downtown.

"This is an integrated, mixed-use development that fits in its
community," Knies said. "It's a city within a city."

And that's just what its designers intended.

"Downtown West is designed to be a true part of the city -- the
opposite of a traditional corporate campus," said Laura Crescimano, founder SITELAB urban studio, the project's designer.

"Our team worked with Google to draw on the uniqueness of the
location to propose a place where urban life and nature can coexist. We've brought together new and historic buildings, opportunities for arts and culture, playful spaces and moments of respite along the creek," Crescimano said. "The draft design standards and guidelines published today set out the
roadmap for a resilient and connected Downtown West."

At the same time, Knies said the Google campus sets a new standard for development that he hopes to see flourish there and spread to other parts of the city.

"People are going to be really excited about this project and
about what it can do in terms of raising the bar for development in San Jose and in terms of knitting together the downtown core with downtown west," Knies said.

Meanwhile, city officials say San Jose is eager for more input
from the public based on the latest plans.

"We now have updated, more specific information to share and
welcome the continued public feedback that will shape the project to reflect our community's needs and aspirations," said Deputy City Manager Kim Walesh.