"It is now time to open Texas 100%," Abbott said. "Every business that wants to open should be open."

Abbott made the announcement while visiting small business owners in Lubbock. He said for nearly half a year, most businesses have been open at only 50-75% capacity.

His new executive order effective next Wednesday allows all businesses of any type to open at 100% capacity and rescinds his previous order requiring Texans to cover their faces.

All places of business, including restaurants, event venues and bars, will be allowed to reopen at full capacity.

Businesses are no longer mandated to require masks, but they can still issue their own individual mask requirements.

The order does give businesses the power to still require masks and limit capacity if they choose. That means a customer can be refused service, but businesses can no longer point to the law being on their side.

Schools are being told to follow guidance from the Texas Education Agency.

The new executive order effective next Wednesday allows all businesses of any type to open at 100% capacity and rescinds his previous order requiring Texans to cover their faces.

Texans have been required to cover their faces in public since this past July when the coronavirus outbreak continued to worsen. At that time in 2020, Dallas County was reporting about 700 new COVID-19 cases per day compared to the 309 reported on Tuesday.

Abbott has said he's optimistic about the increasing availability of vaccines across the state. So far 5.7 million vaccines have been administered in the state.

Plus, the governor said Texans now know how to protect themselves and have access to antibiotic treatments for the virus.

"Despite these changes remember this, removing state mandates does not end personal responsibility personal vigilance is still needed to contain COVID it’s just that now state mandates are no longer needed," he said. 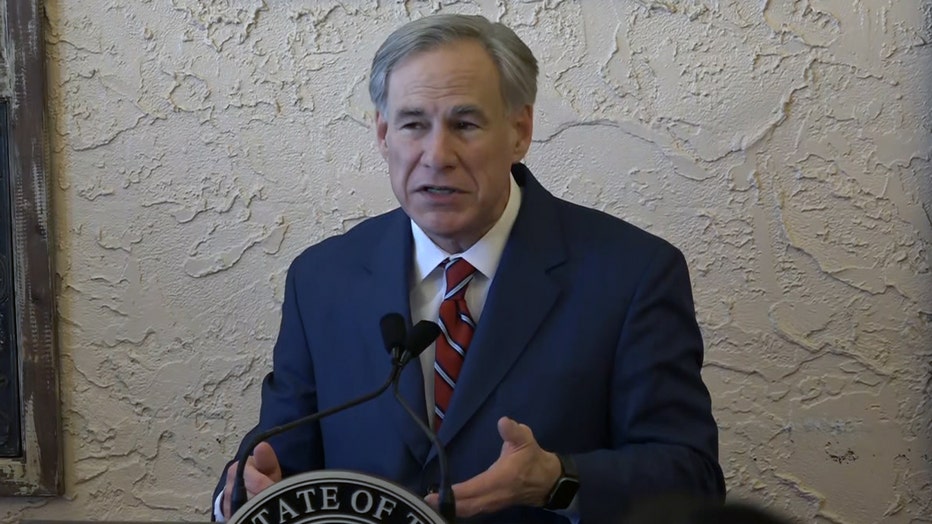 But it’s the end of the mask mandate that’s concerning many in the medical community.

"We have our local experts that are all saying this is not recommended. This is not a good idea at this point," said Dallas County Health Director Dr. Philip Huang.

Hospitalizations are the lowest they’ve been in months. Yet, they’re still on par with the summer peak when the governor first issued his mask mandate. The governor says the current downward trend and increasing vaccine distribution played a role in his decision.

"COVID has not disappeared. It still exists in Texas, the US and across the globe," Abbott said. "But it is clear from the recoveries, the vaccinations, the hospitalizations that state mandates are no longer needed."

More than 93% of Texans have not been fully vaccinated.

If hospitalizations in a region rise about 15% for seven straight days, a county judge may use COVID-19 mitigation strategies in their county.

However, Abbott said counties cannot jail or impose penalties on those who fail to wear a face mask.

The message from Dallas County’s top medical official to everyone is simple.

"Just because you can doesn't mean you should," Dr. Huang said.

"On the day 25 new deaths raise @DallasCountyTx death toll above 3k, @GovAbbott lifted all his state orders designed to protect you and those you care about from #COVID19," Jenkins tweeted, encouraging county residents to listen to health experts and continue to wear a mask.

In Tarrant County, leaders say they do not agree with the decision but they say their hands are tied.

Before the governor’s announcement, Tarrant County Judge Whitley said he had no plans to rescind the county’s mask order. But to avoid confusion after Abbott’s announcement, Whitley changed course and lifted all county mandates, including the county’s disaster declaration.

Tarrant County leaders say they do not agree with Gov. Abbott’s decision, but their hands are tied. The county judge decided he might as well lift the county's emergency declaration.

"I probably would have waited until after spring break," Whitley said. "It seems like every time we relax, then people go 180 degrees and so we end up with a spike."

For many students in North Texas, spring break starts on March 15, just days after the statewide occupancy restrictions are set to end.

Joe T. Garcia’s Restaurant Owner Joe T. Lancarte says he expects a spring break rush but still plans to operate at half capacity at the Fort Worth location.

Staff will continue to wear masks and check temperatures at the door but give customers the option to enter unmasked if they choose.

Some state health experts say if lifting restrictions is where the state is headed, they’d prefer a more measured, targeted approach over time -- with lifting the mask mandate the final step.

The DFW Hospital Council released a statement, calling the governor’s decision unfortunate and said losing the mask mandate will likely cause further spread of the virus.

"I really just think we are so close. If we could just make it to the summer and fall," said Dr. Diana Cervantes, epidemiologist and assistant professor, UT Health Science Center in Fort Worth.

She suggested starting with opening up nursing homes where vaccinations have already occurred and expanding to restaurants as the state heads into spring where eating outside and opening windows is an option.

Cervantes also said vaccine availability does not immediately equal immunity and it can take weeks for a patient to build antibodies.

"There’s a time difference between having a vaccine come out and actually having it in people’s arms and then having enough time lapse to say they are covered," she said.

Variants — another concern …and the timing of rolling back restrictions now instead of waiting a few weeks.

"I think what we really want to avoid is that spring break spike," Cervantes said.

The nation's top health experts have urged states not to get ahead of themselves by rolling back protective measures too early.

"At this level of cases, with variants spreading, we stand to completely lose the hard-earned ground we have gained. These variants are a very real threat to our people and our progress. Now is not the time to relax the critical safeguards that we know can stop the spread of COVID-19 in our communities, not when we are so close," said Dr. Rochelle Walensky, the director of the Centers for Disease Control and Prevention.

Nearly two million Texans have been fully vaccinated against COVID-19. But with children not eligible and many adults refusing to get the shots, Texas may not reach what's called "herd immunity" for a long time.

Experts have said Americans may need to continue wearing masks in public into next year regardless of how many people get the vaccine.

RELATED: WHO official says it’s ‘premature,’ ‘unrealistic’ to think COVID-19 pandemic will be over by end of year