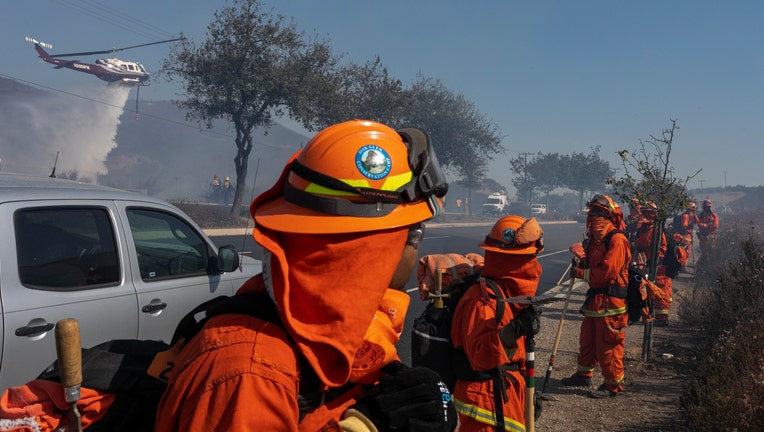 BUTTE COUNTY, Calif. - Standing in the center of a burned-out forest in Butte County, California Gov. Gavin Newsom on Friday gave an impassioned speech about climate change and he paved the way for formerly incarcerated people to become professional firefighters.

"There is a climate emergency," he said, with smoke-filled skies from the North Complex Fire as his backdrop. "This is real."

He cited the hottest temperature ever recorded in Los Angeles County last weekend at 121 degrees, a record-setting 3 million acres of earth burned in California so far this fire season and an eerie orange glow that blanketed the Bay Area because of the unprecedented amount of smoke choking the skies.

He implored people to stop their "ideological B.S." and he called on citizens to act and reverse the ill-effects that humans have had on the planet.

"It is here now, California is America fast-forward," Newsom said. "What we're experiencing is coming to communities all across America unless we get our act together...This is a climate damn emergency."

California state prison inmates who work on the fire lines are waging a battle against the state's corrections department, which they say has overlooked their good works and is releasing violent offenders more frequently than inmates providing the crucial firefighting services.&nbsp; Brooks Jarosz reports

And in fact, Newsom himself took a long-awaited action.

He signed AB 2147, a bill that will allow formerly incarcerated people to be able to try to expunge their records and become professional firefighters. Those convicted of sex offenses and violent felonies would not be eligible. Formerly incarcerated people would also have to bring their cases to court and have a judge agree to set aside their conviction.  This also only applies to those who have already completed the prison firefighting program.

"Inmates who have stood on the frontlines, battling historic fires should not be denied the right to later become a professional firefighter," Newsom later said in a tweet after signing the bill.

Newsom isn't the only state leader to be concerned about the burning Golden State. On Friday, New York Gov. Andrew Cuomo tweeted out photos of the orange skies in California earlier this week, saying that climate change is a national emergency, not just a local one.

It's not just California that is experiencing odd and deadly weather changes.

To the north, parts of Oregon that don’t usually catch fire are in flames.

Meanwhile, the Atlantic’s 16th and 17th named tropical storms are swirling, a record number for this time of year. Powerful Typhoon Haishen lashed Japan and the Korean Peninsula this week. Last month it hit 130 degrees in Death Valley, the hottest Earth has been in nearly a century. Hurricane Laura devastated parts of the Gulf Coast last month, while swaths of Iowa are recovering from a derecho that brought hurricane force winds to the Midwest.

Freak natural disasters — most with what scientists say likely have some kind of climate change connection — seem to be everywhere in the crazy year 2020. But experts say we’ll probably look back and say those were the good old days, when disasters weren’t so wild.

Meanwhile, on the presidential campaign trail, the issue of climate change has been largely missing.

Still, environmental issues have barely had an impact on the campaign for the White House, in part because of the vulnerabilities it highlights for President Donald Trump and his Democratic challenger, Joe Biden.

The president is already facing multiple challenges, including the pandemic, joblessness and social unrest, and can ill afford another one. When he talks about California, where fires have killed at least a dozen people and threatened thousands of homes, it’s mostly to blast the state’s Democratic leaders.

And for Biden, the spreading fires are a reminder to the party’s progressive base that he doesn’t embrace some of the most liberal elements of the Green New Deal, the grand plan for tackling climate change.

“The Biden campaign understands that a full embrace of an aggressive climate change agenda could create problems for them in Upper Midwest,” said Dan Schnur, who served as an adviser to former California Gov. Pete Wilson and Arizona Sen. John McCain. “Trump has shown no desire to talk about California beyond using it as a liberal punching bag to make his case to his conservative base.”

Still, climate activists say the moment underscores the need for Washington to support the Green New Deal, an ambitious — and likely costly — plan to wean the U.S. from fossil fuels and drastically cut greenhouse gas emissions.

“It’s no surprise that Trump isn’t talking about the fact that America is literally in flames on his watch — but why isn’t Biden?” said Rebecca Katz, a political strategist who has worked with Democratic congressional candidates supporting the measure. “For Democrats to not connect what’s happening on the West Coast to Trump’s failure on climate change is just political malpractice.”

The Biden campaign’s response to the fires is especially notable since his running mate, Sen. Kamala Harris, represents California in the Senate. She was campaigning in Miami on Thursday, but her spokesperson, Sabrina Singh, said Biden and Harris “have been closely monitoring the wildfires raging across the state and highlighting the urgent need to address the threat of climate change.”

“We have to get President Trump out of the White House and treat this crisis like the existential threat that it is,” he said.

While Biden hasn’t embraced the full Green New Deal, he has promised to make creating new green jobs and drastically reducing U.S. carbon emissions part of a larger recovery plan designed to revive the economy after the coronavirus abates. Biden’s top advisers note that many of his proposals will move the country toward the Green New Deal, but some activists worry it is not ambitious enough.

“I’m looking outside my window right now. Literally the world looks like it’s on fire. For young people across the board, but especially young Latinos, we also care very deeply about climate change, not just like immigration,” said Christian Arana, policy director for the California-based Latino Community Foundation. “This is a perfect moment to get on TikTok or do an interview with Teen Vogue or whoever to talk about these issues.”