Steve Paulson says today will be another day of fog, smoke and bad air. Temps will be cooler

Cities including Fairfield, San Rafael, San Francisco and Oakland were awash in purple, the color the Bay Area Air Quality Management District has chosen for "very unhealthy air." All the cities had Air Quality Indexes of 200 or more.

"It's bad, I mean bad out there," KTVU meteorologist Steve Paulson said Friday morning. "It's awful and it's just getting worse."

Worse, because of a dense fog advisory issued through Friday morning, which means trapped smoky air near the surface of the earth with no way for it to dissipate. Friday also marked the 25th consecutive day of Spare the Air alerts, a record set in the Bay Area since the district began issuing them in 1991.  The alerts began Aug. 18 after thousands of lightning strikes ignited three massive wildfires to the north, south and east of San Francisco.

Counties in the Bay Area on Friday issued warning alerts to residents that read like this: "When air quality is very unhealthy, everyone, especially children, older adults and those w/ breathing or heart issues, should stay indoors with windows and doors closed." San Francisco officials held a news conference, telling residents how to stay safe, including not dining outdoors.

"I know San Franciscans are resilient and are tired of being resilient," said Mary Ellen Carroll, executive director of the Department of Emergency Management. "But we have to take care of each other. We will get through it together." 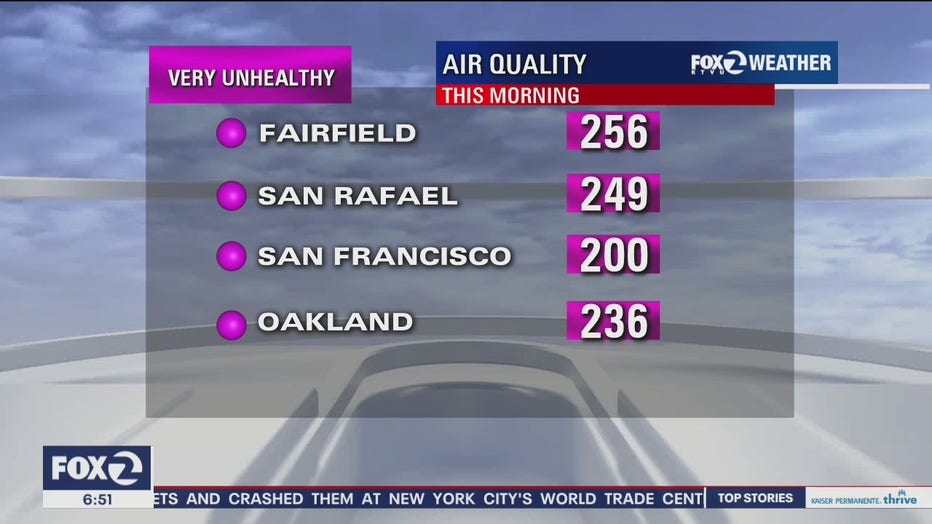 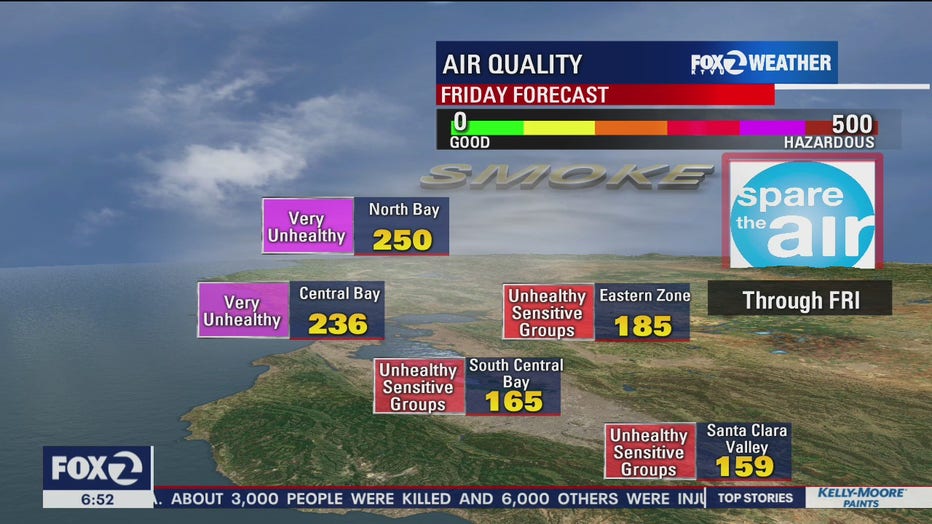 The National Weather Service said that conditions likely won't get better until at least the middle of next week.

All the dense smoke is from the dozens of raging wildfires along much of the West Coast.

Eerie orange and red skies that appeared on Tuesday across California, Oregon and Washington have now mainly turned gray thanks to stronger winds coming in from the Pacific Ocean that helped to disperse thick smoke that acted as a filter scattering blue light and only allowed yellow, orange and red light to reach the ground.

But as the wind scattered the smoke and a layer of air blocking it from reaching the ground started dissipating Thursday, smoke particles began mixing with ground-level air worsening air quality in much of California and parts of Oregon where wildfires are raging.

Antonio Maffei sent up a drone to show the awful air quality above Daly City, because of the wildfires raging in California. The air quality was very unhealthy for much of the state.

Tatenysha Harris, who was shopping in Emeryville, said it was the first time she has left her house in a week because of the poor air quality.

Her 8-year-old daughter suffers from severe asthma and Harris said fires that have raged in Northern California the past four years have made her dread this time of year because the smoke exacerbates her daughter’s breathing problems.

“Right now we’re getting through it by staying inside as much as possible with the windows shut,” she said. “We’re buying time until we buy a house and move away.”

“We can’t keep going through this every year,” she said.