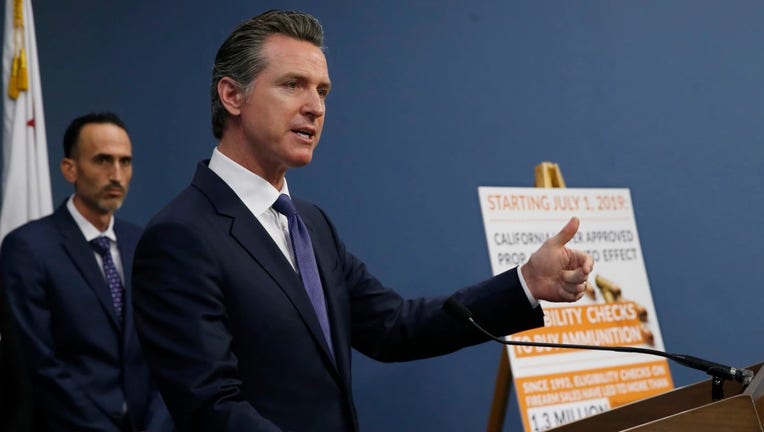 In all, Newsom signed 15 bills into law that will enact new gun regulations in California.

"Gun violence is an epidemic in this country, and one that's been enflamed by the inaction of politicians in Washington," Newsom said in a statement. "California is once again leading the nation in passing meaningful gun safety reforms."

The package includes five bills that will strengthen gun violence restraining orders, which are judicial orders prohibiting gun possession for people determined to be at risk of harming themselves or others.

Current law limits such restraining orders to a maximum of one year, but AB 12 by Assemblymember Jacqui Irwin, D-Thousand Oaks, will extend that to five years.

Also, such restraining orders can currently only be recommended by a member of the person's immediate family or a law enforcement official, but AB 61 by Assmeblymember Phil Ting, D-San Francisco, allows employers, employees, coworkers or teachers to petition for a gun violence restraining order as well.

Such restraining orders "are a proven gun violence prevention tool that can help save lives," Ting said in a statement.

He noted that research by UC Davis found that no one in a sample of individuals subjected to gun violence restraining orders were involved in subsequent gun-related violence.

SB 376 by Sen. Anthony Portantino, D-La Caada Flintridge, caps firearm sales by individuals without a license at five transactions or 50 firearms and requires background checks for guns sold at auction or in raffles. Previously such restrictions were only on handguns.

"The new laws will be critical to closing loopholes and strengthening ammunition background checks," officials with Becerra's office said in a statement.

Another bill signed by Newsom on Friday is aimed at curbing the proliferation of "ghost guns," firearms constructed from individual parts that have no registration or serial number.

A bill by Assemblymember Mike Gipson, D-Carson, will require that certain gun parts that could be used to build firearms be sold through a licensed vendor starting in 2024.