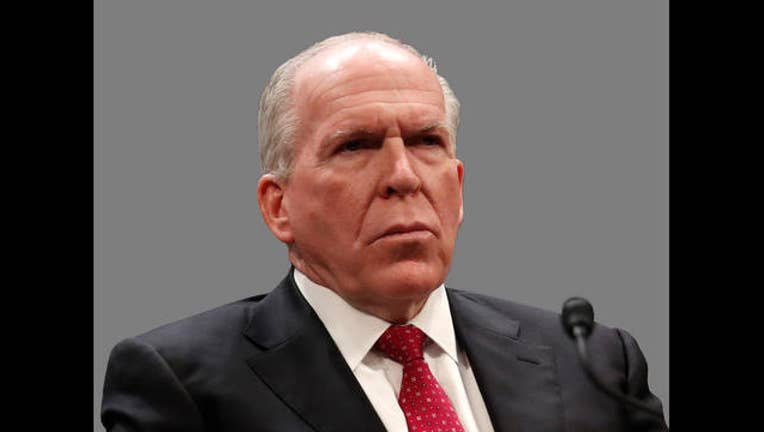 WASHINGTON (AP) -- Former CIA Director John Brennan told Congress Tuesday he personally warned Russia last summer against interfering in the U.S. presidential election and was so concerned about Russian contacts with people involved in Donald Trump's campaign that he convened top counterintelligence officials to focus on it.

Meanwhile, a Senate committee issued two additional subpoenas to businesses of ousted Trump National Security Adviser Michael Flynn, one of several key figures in the Russia-Trump campaign probe, and sent a letter to his lawyer questioning his basis for claiming a Fifth Amendment right not to provide documents.

If there is no response from Flynn, the Senate Intelligence Committee may consider a contempt-of-Congress charge, said Chairman Richard Burr of North Carolina.

Tuesday's letter narrowed the scope of the documents the panel is seeking. Flynn had rejected the earlier subpoena for records as being so broad that providing them could make him vulnerable.

Former CIA chief Brennan's testimony to the House intelligence committee was the clearest public indication yet of the significance the Russia contacts play in counterintelligence investigations that continue to hang over the White House.

Brennan, who was President Barack Obama's CIA director, said he couldn't say whether there was collusion between Russia and the Trump campaign, an issue being investigated by congressional committees and now a federal special counsel.

"I don't have sufficient information to make a determination about whether or not such cooperation or complicity or collusion was taking place," Brennan said. "But I know there was a basis to have individuals pull those threads."

"It should be clear to everyone that Russia brazenly interfered in our 2016 present election process" and did so despite strong protests and his warning, he said.

Trump has predicted the investigations won't find collusion, and his efforts to cast doubt and curb the probes have led to the appointment of a special counsel at the Justice Department.

News reports that Trump asked his national intelligence director and National Security Agency chief to state publicly there was no evidence of collusion have heightened criticism.

Dan Coats, the current U.S. director of national intelligence, declined to comment Tuesday on a Washington Post report that said the president had asked him to publicly deny any collusion between Russia and Trump's campaign.

Coats told senators at a Senate hearing that it would be inappropriate to discuss private conversations he'd had with the president.

A day earlier, Flynn had invoked his constitutional right not to incriminate himself in response to the Senate committee's request for details about interactions between him and the Russians. Trump associates Paul Manafort and Roger Stone have provided the committee with information, while former campaign adviser Carter Page has not.

The Senate panel on Tuesday decided to issue two additional subpoenas to Flynn's businesses and sent the letter to his lawyer asking about the legal basis for his invoking his Fifth Amendment right over documents as opposed to testimony.

Burr said if there is no response from Flynn his committee may consider a contempt-of-Congress charge.

"Everything is on the table," Burr said. Everything but immunity, he added.

Investigators also have questions about contacts between the Russians and Trump's son-in-law Jared Kushner and Attorney General Jeff Sessions.

Brennan said he had seen intelligence that "revealed contacts and interactions" between Russian officials and Americans "involved" in the Trump campaign. He said this was cause for concern "because of known Russian efforts to suborn such individuals, and it raised questions in my mind, again, whether or not the Russians were able to gain the cooperation of those individuals."

In late July of last year there was so much concern that he convened a group of officials from the CIA, FBI and National Security Agency to focus on it exclusively.

He said he had personally told a senior Russian security official that continued meddling would backfire and prevent any warming of relations after the election. He said the Russian official denied such interference but also said he would relay the concern to President Vladimir Putin.

Trump, currently on a nine-day international trip, has had his own conversations with the Russians questioned in light of reports that he shared extremely classified intelligence with Russian diplomats in the Oval Office on May 10.

Brennan said that while he was CIA director he shared classified information with Russia and other nations about threats related to terrorism. But if reports about what Trump shared with the Russians are true, he said, it would be a violation of protocol. This type of information is typically shared in intelligence channels and not between the U.S. president and foreign diplomats, Brennan said.