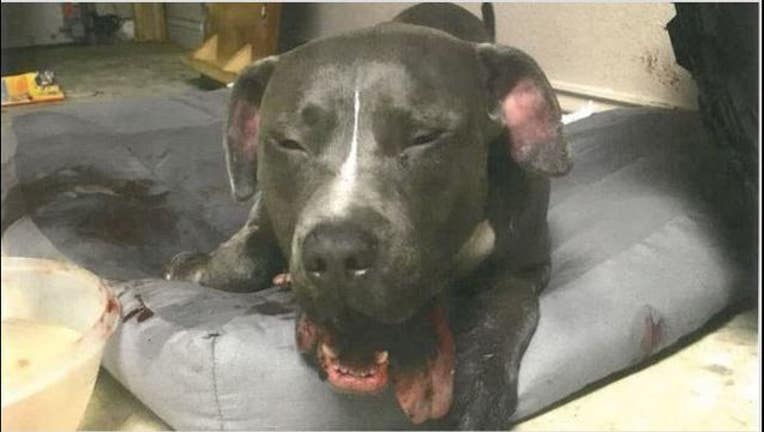 HAYWARD, Calif. (BCN) -  A Hayward man on Thursday was placed on three years' felony probation and ordered to serve 30 days in the county jail for brutally beating his 9-month-old pit bull puppy for defecating in his house, according to prosecutors.

According to O'Malley, Tadduc told investigators that he tried to discipline the dog by "yelling at her to go to timeout" but Aaliyah instead retreated to the third floor of his house.

O'Malley said Tadduc grabbed the puppy and pulled her down the stairs by her hind legs but she turned around and bit his finger, inflicting what police said was only a superficial wound.

Tadduc allegedly told investigators that Aaliyah got away from him and hid in the bathtub so he again dragged the puppy by her legs down the stairs and took her to the garage, where he used a wooden pole to hit her in the face. The incident ended when the dog hid beneath the gas grill in the
garage, prosecutors said.

The next day, according to O'Malley, Tadduc said he saw the bloodied and injured puppy still in the garage but decided to go to work instead of rendering any aid.

His roommates later found Aaliyah still hiding behind the grill's propane tank and immediately took her to a veterinarian, according to prosecutors.

O'Malley said Aaliyah suffered a compound fracture of her upper left jaw with the bone protruding outside the gums, a fractured left temporomandibular joint and a loose left rear molar.

Prosecutors said Aaliyah also had bruises throughout her body, including the inside of both ears, and as a result of the extreme and serious nature of the injuries she underwent six hours of reconstructive surgery to her jaw.

O'Malley said she formed the Alameda County Animal Cruelty Task Force in 2017 to focus on the link between animal abuse and human violence and to ensure that cruelty to animals is not quarantined from the broader issue of violence in our homes and society.   The group includes animal cruelty officers, animal shelters, advocacy groups, police officers, prosecutors and veterinarians.

In addition to being placed on three years' felony probation and ordered to spend 30 days in jail Tadduc must participate in 26 anger management classes plus additional counseling.   He also will forfeit any ownership interest in Aaliyah and will be prohibited from owning any animals for three years.