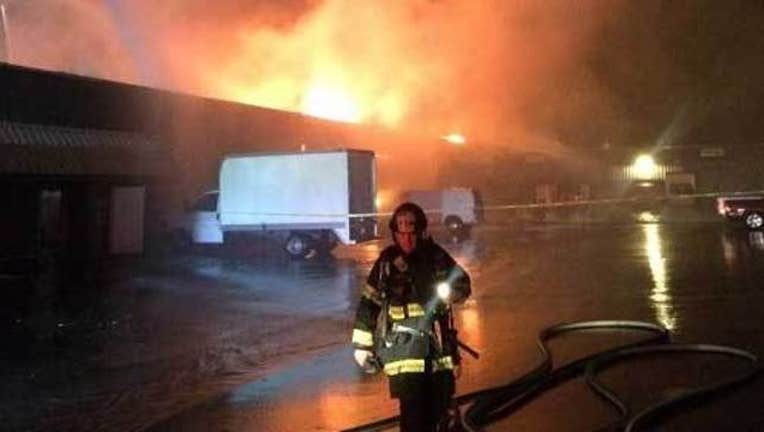 An employee at a nearby business had reported a fire at an industrial complex in the 400 block of Reynolds Circle near U.S. Highway 101 around 12:30 a.m., Van Elgort said.

A sign indicating that hazardous materials are inside is posted on the outside of the building, according to Van Elgort.

A four-alarm response was quickly called for and the blaze was contained by about 2 a.m., Van Elgort said.

About 80 firefighters responded to the scene and 45 of them needed to undergo decontamination procedures, he said.

No evacuations or shelter in place orders were needed while firefighters battled the blaze, Van Elgort said.

The business where the fire started is closed for the day and has hired a private company to clean up the puddles of contaminated water left by the blaze, he said.

Other neighboring businesses are closed since access has been closed off to the industrial complex, Van Elgort said.

Two fire crews remained at the scene this morning to put out any hot spots, according to Van Elgort.

Other agencies including the Santa Clara County Fire Department and the California Department of Fish and Wildlife were called to the scene.