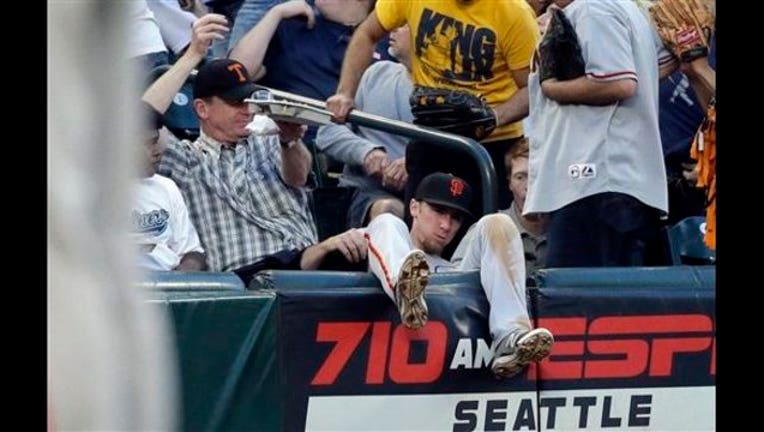 Hernandez (10-4) allowed four hits, struck out five and walked two to rebound from the worst outing of his career. The Mariners' ace allowed a runner to reach scoring position twice, but both times he quickly retired the side by inducing a groundout.

Charlie Furbush retired the first two batters of the ninth and Carson Smith struck out Matt Duffy for his fourth save in five chances.

Jackson tripled home Mike Zunino with one out in the sixth off San Francisco starter Madison Bumgarner (7-4). Robinson Cano followed with an RBI double.

Bumgarner, who lost a perfect-game bid in the fifth, also gave up four hits in eight innings, striking out nine and issuing one intentional walk.

Hernandez allowed eight runs in one-third of an inning at Houston on June 12, matching his shortest career outing. The only other time he lasted just one out was due to an injury in a 2007 start against Minnesota.

Bumgarner's perfect game was broken up by a ground ball that took a large hop in front of shortstop Brandon Crawford and bounced off his chest. Crawford picked up the ball and threw high to first. The play was ruled a hit for Mark Trumbo. An error was given to Crawford after his throw allowed Trumbo to reach second.

The Mariners got their first clean base hit an inning later when Zunino singled through the left side with one out. Jackson followed with his second triple of the season to score Zunino.

Duffy had a pair of singles for San Francisco and is 5 for 8 in his past two outings.

Mariners: Rookie Mike Montgomery makes his fourth career start in the finale of a two-game set.

Giants: A struggling Ryan Vogelsong, who is sporting a 4.81 ERA, takes the mound for San Francisco.

Mariners: Manager Lloyd McClendon confirmed that RHP Hisashi Iwakuma is still scheduled for a rehab appearance with Class A Short-Season Everett on Saturday. The former All-Star is recovering from a strained lat, one that has kept him out since April 23.