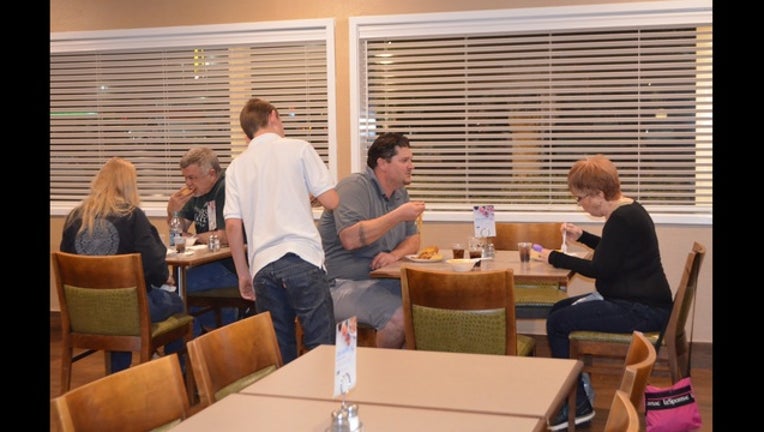 Photo Courtesy: Julie Zeeb – Red Bluff Daily News. This photo from Daily News reporter Julie Zeeb shows Kevin McKay on Nov. 16, among evacuees from the Camp Fire getting a free meal at the Holiday Inn and Express in Corning, in Tehama County.

PARADISE, Calif. (KTVU) - Not long after the Camp Fire broke out on the morning Nov. 8, school bus driver Kevin McKay was at work at Ponderosa Elementary School in Paradise and had no idea how critical his presence there would be.

McKay had just unloaded his young passengers at the school. Then word came of a fire and then the order to evacuate. School administrators jumped into action and scrambled to make sure parents were alerted so children could be brought to safety.

Parents came in droves and school officials made sure they were connected with their child.

But a remaining 22 kids ended up stranded because their parents could not reach them in time.

That's where McKay's important role as bus driver became apparent. Through a treacherous five hour journey, he would be responsible for safely transporting the nearly two dozen kids with the help from kindergarten teacher Abbie Davis and second grade teacher Mary Ludwig.

It was a series of life and death decisions that the 41-year-old bus driver had to make during that frightening drive.

Flames threatened the roads, the air was dark and smokey, making it difficult to see, and the mass exodus of panicked evacuees led to traffic gridlock with the bus at a standstill with other vehicles on multiple occasions.

"It was dark and smokey and beginning to get more and more dark, almost like dusk," McKay said in an interview with the Red Buff Daily News. "An hour later, we had only traveled about two miles," he added.

With all of the traffic, some people got out of their cars and stood on the side of the road.

The bus was starting to fill up with smoke and some of the frightened kids onboard were feeling sick from the bad air.

McKay said that's when a good Samaritan, a 22-year-old man, noticed all of the kids on the bus. He came up to the vehicle and offered a bottle of water, saying that's all he had to offer, according to the Daily News.

The bus driver decided to use the water to help protect the kids from the smoke. He took the shirt off his back and handed it to the teachers, who then tore it into strips, doused the pieces with the water and told the kids to put the wet cloth over their mouth to help them breathe.

After hours on the road, McKay and his busload reached Biggs, located some 60 miles away from where they started. That's where they reached clear skies -- no longer covered up with smoke, and the kids were brought to a school where they were later reunited with their family.

McKay and the teachers remained at Biggs Elementary School until every child was accounted for and back in the arms of their parents.

The bus driver later learned that he is among the many whose home was taken by the fire.

He's also among those being hailed a hero, whose courageous acts helped save lives. And amid the loss, McKay said he feels blessed and grateful that his family and the children he rescued are safe and that he was at the right place at the right time.