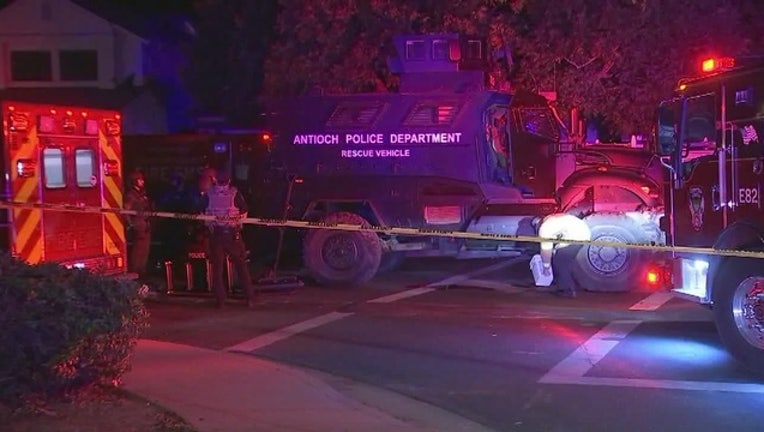 ANTIOCH (BCN) Two high-powered BB rifles and a BB replica automatic pistol were seized today at an Antioch home after a suspect shot an officer in the head and held police at bay for five hours, Antioch police said.

Police were first called at 7:26 p.m. Monday to the home in the 4500 block of Deerfield Way by a neighbor who said the suspect had threatened him with a firearm, police said in a news release.

When officers approached the suspect's home, he called to them from an upstairs window and said he would be right down. When the front door opened, however, the officers were immediately fired upon with what turned out to be a high-powered BB firearm, police said.

One officer was hit in the head, and was taken to John Muir Hospital in Concord, bleeding profusely, according to Antioch Police Chief Tammany Brooks. The officer was treated and released, police said.

After the officer was shot police sent backup, including a hostage negotiation team, and the area was cordoned off and a shelter in place was established for the neighborhood.

During the standoff, one family member left the home and another stayed inside. Police didn't know whether the second person was being held against their will, Brooks said. It was also discovered that the suspect had a history of law enforcement contact in another city and that a firearm was currently registered to him.

Negotiators worked with family members to build a rapport with the suspect, leading to his peaceful surrender sometime after midnight.

A subsequent search warrant was served at the home, where two high-powered BB-type rifles were recovered, along with a BB-type replica of a black full-sized automatic pistol, BB ammunition and live pistol ammunition, according to police.