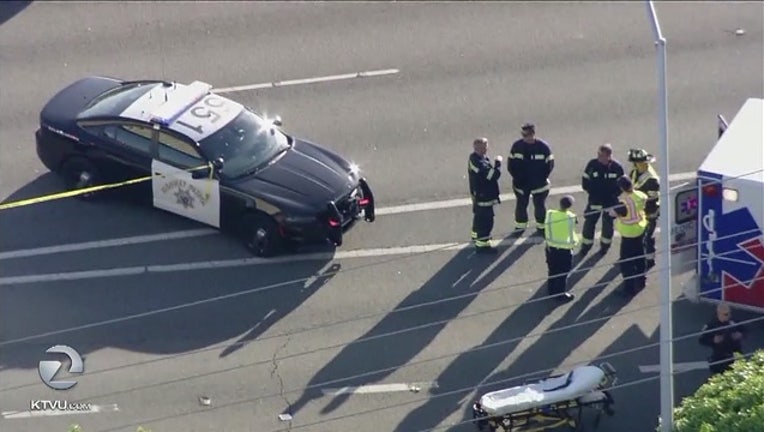 Officers shot and killed an armed man on a San Francisco Bay Area highway congested with rush-hour traffic who was attempting to carjack a woman's vehicle, authorities said Saturday.

The officers told the man to drop his handgun before opening fire on him, but officials said he did not comply.

The roadway was reopened around midnight, according to the CHP.

San Mateo Police Department Capt. Dave Norris said a suspect was shot and killed during an incident that involved three California Highway Patrol officers who were confronted by an armed suspect on the shoulder of Highway 101 around 5:30 p.m.

The suspect, whose identity was pending, was pronounced dead at the scene.

Police closed all northbound lanes of the 101 and the westbound lanes leading to the northbound 101 were closed. Vehicles were forced to exit the 101 freeway onto Hillsdale Boulevard while authorities investigated the incident.

The incident was first reported as a traffic collision involving two vehicles at 5:28 p.m. on northbound Highway 101 near state Highway 92, CHP officials said. A suspect then allegedly got out of a vehicle and began shooting.

Norris said the three CHP officers were confronted by an armed suspect when they arrived on the scene. All three officers fired their weapons, killing the armed man, authorities said.

None of the officers were hurt during the incident.

The incident was initially reported as a traffic collision involving two vehicles on the highway, CHP officials said.

Following protocol in officer-involved shootings, three agencies are involved independently in the investigation of the incident, police said.