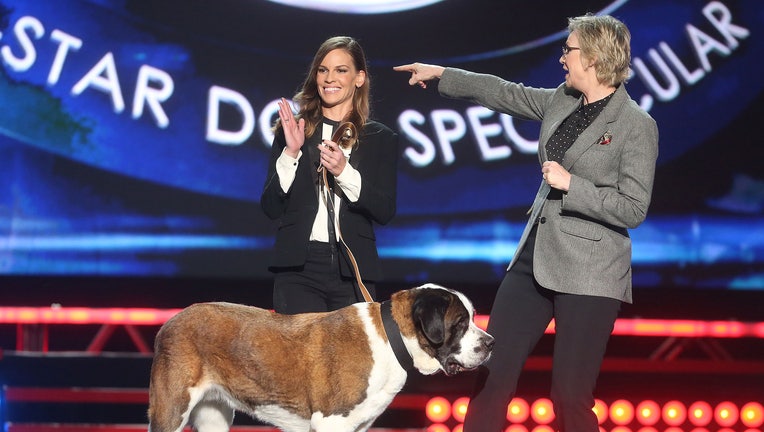 But when she came upon a line of squad cars and people with cameras near the Greyhound bus station, she set aside her search to investigate.

"I noticed there were like eight police cars and people with cameras — I thought maybe somebody got shot," Blackwell told her local paper, the Times Union.

Fortunately, tragedy did not lurk — Blackwell had stumbled upon a movie crew — but ended in a one-in-a-million lucky happenstance.

Long story short: Her dog of 15 years was found — by a movie star with a history of rescuing dogs.

You won't believe this, the crew told her, but a celebrity had found her pooch.

"I asked them if anyone saw a little brown dog, and they said, ‘Yes, we’ll call her.’"

An hour later, a gray car pulled up, and there was tiny Blue sitting in the lap of two-time Oscar winner Hilary Swank.

RELATED: Rescued puppy found with burnt plastic in fur to be fostered by firefighter

Blackwell asked Swank for her autograph, but Swank did better: They took a picture.

And Blackwell, wanting to be sure Swank got proper credit, posted the photo on Facebook.

"I'd stopped and asked if someone seen a little brown dog? A man walked over to my car and said, yes, this woman picked him up," she wrote in her post.

"I said who? He replied, a celebrity," Blackwell wrote. "He called the person who had him. And they said she’s on her way back. You’ll never guess who had him?"

The Million Dollar Baby herself.

"She’s not the type of person," Blackwell said, "who’s going to blow the horn telling people what she did."

Swank is no stranger to rescuing dogs.

"Every dog I’ve ever rescued and also shared my life with have all had their unique way of being in the world," said Swank, who has adopted numerous dogs, in a YouTube video posted by People magazine.

Swank established a foundation, Hilaroo — a portmanteau of her name and the name of a dog she adopted, Karoo — that matches abandoned dogs with children whom the foundation says "have been given up on by society."