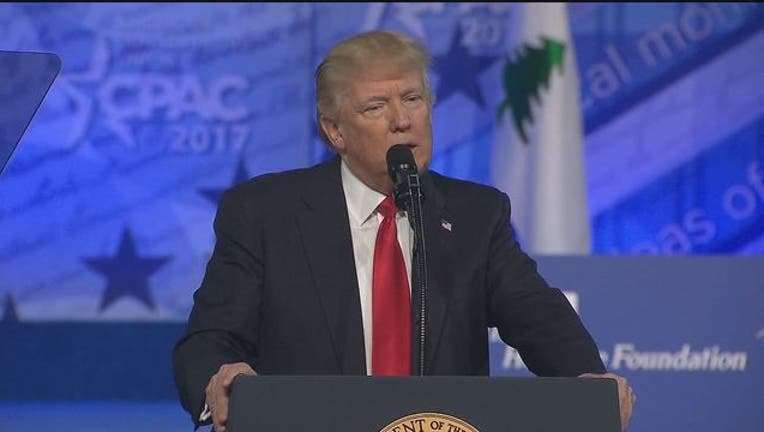 WASHINGTON (AP) -- Raging against a political firestorm, President Donald Trump on Friday shot a sharp warning at his ousted FBI director about possible "tapes" of their disputed private conversations, raising the provocative possibility that recording devices have been installed in the White House.

Trump's top spokesman refused to comment on whether listening devices are active in the Oval Office or elsewhere, a non-denial that recalled the secretly taped conversations and telephone calls that ultimately led to President Richard Nixon's downfall in the Watergate scandal. Trump's warning to fired FBI Director James Comey prompted new accusations of interference in an investigation into allegations of collaboration between Russia and the Trump presidential campaign last year.

It also escalated a potentially damaging stand-off between a fuming, undisciplined president and the unorthodox lawman he dismissed three days earlier. Not to mention Congress, which has its own investigations underway.

Democrats quickly seized on the dispute, demanding the White House turn over any tapes that might exist of the president's conversations with Comey.

In an interview with Fox News Friday, Trump declined to comment on whether he has listening devices in the White House.

"Well that I can't talk about. I won't talk about that. All I want is for Comey to be honest. And I hope he will be," Trump said.

For a president whose tweets frequently rattle Washington -- and foreign capitals -- Trump's message early Friday morning was particularly jarring: "James Comey better hope that there are no `tapes' of our conversations before he starts leaking to the press!" the president wrote.

The White House refusal to elaborate left open several questions: Was Trump, as his predecessor had in the 1970s, been covertly taping conversations? Was he trying to intimidate Comey? Was he suggesting Comey had recordings? Or was it merely a button-pushing claim launched over frustration at news coverage of the controversy.

The tweet appeared to refer to a series of three conversations in which, Trump claims, Comey assured him he was not under FBI investigation as part of the bureau's probe into Russia's interference in the 2016 election. Comey has not explicitly denied the account. But sources close to him have cast doubt on the president's account, noting it would be extraordinary for an FBI director to discuss an open investigation.

On Friday, a person close to the former director recounted a different version. At a one-on-one dinner at the White House in January, Trump asked Comey to pledge his loyalty to the president and Comey declined, instead offering to be honest with him, according the person, who requested anonymity to discuss private conservations.

Spicer denied that account, insisting that the president simply "wants loyalty to this country and the rule of law." Details of the dinner were first reported by The New York Times.

The firing of Comey already has left Trump with the dubious distinction of being the first president since Nixon to dismiss a law enforcement official overseeing an investigation tied to the White House. He also, like Nixon, has grown increasingly isolated in the White House, recently relying on only a small circle of family members and loyal advisers while livid about the West Wing's failing efforts to get ahead of the damaging Russia story, according to several people close to Trump. They also commented only condition of anonymity to discuss private conversations.

Those people also describe him as deeply frustrated by what he views as unfair media coverage -- irritation that emerged in a separate tweet in which he suggested he may shut down the regular press briefings at the White House.

Trump was widely known to record some phone conversations at his office in Trump Tower during his business career, sometimes remarking to aides after a call as to whether or not he had taped it.

"I would note that New York is a one-party consent state, and President Trump has always abided by the law," said Sam Nunberg, a former campaign aide. Federal law and the law in New York State do not require both parties on a call to be aware that it was being recorded. In Florida, where the president frequently spends weekends, both parties must consent to recording.

Spicer, who kept his answers short during Friday's briefing and largely dodged specific questions about Trump's meeting with Comey, said he was not aware that any recording of the Trump-Comey meeting exists. Associates of the former FBI director, who remained out of sight Friday at his suburban Virginia home, said they believed any tapes would validate Comey's side of the story.

It was not clear when Comey would speak for himself. He declined an invitation to appear at a closed meeting of the Senate intelligence committee next week.

The face-to-face meeting between the president and the director raised other concerns. It came just days after the FBI interviewed Trump's then-National Security Adviser Mike Flynn about his conversations with the Russian ambassador and a day after acting Attorney General Sally Yates first alerted the White House that she believed Flynn had lied about the conversations and could be blackmailed by Moscow.

Former National Intelligence Director James Clapper said Friday that Comey was uneasy about attending the dinner due to the "appearance of compromising the independence of the FBI which is a hallowed tenet in our system."

Clapper also told MSNBC that he didn't know if there was collusion between the Trump campaign and Russian officials, contradicting the president's assertion that the former director had cleared him of wrongdoing.

The swirling controversy has obliterated any momentum from the House passage of the Republican health care bill last week and threatens to overshadow Trump's first international trip, beginning next week, in which the president will meet with leaders in both the Middle East and Europe.

Trump, in an NBC interview on Thursday, said that he had been intending to fire Comey -- whom he derided as a "showboat" and "grandstander" -- for months and that it had nothing to do with the Russia investigation. But he also said, "In fact when I decided to just do it, I said to myself, I said you know, this Russia thing with Trump and Russia is a made-up story, it's an excuse by the Democrats for having lost an election that they should have won."

Even before Trump's provocative tweets, the White House was scrambling to clarify why Comey was fired. It initially cited a Justice Department memo criticizing Comey's handling of last year's investigation into Hillary Clinton's emails as the impetus, only to have that version undercut by Trump himself.

Senate intelligence committee Chairman Richard Burr said he doesn't think the FBI's Trump-Russia investigation was the reason for the firing. But he called Trump's tweet "inappropriate."