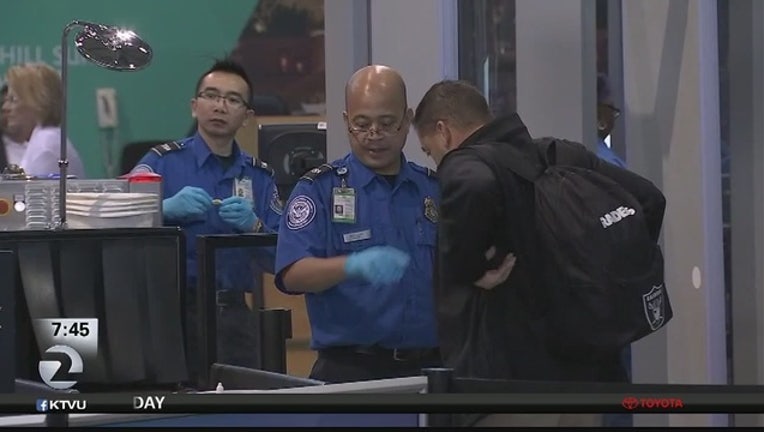 ATLANTA (AP) - Travelers who were dreading long airport security lines Friday ahead of the Memorial Day weekend instead reported moving quickly through checkpoints after authorities opened extra screening lanes and used bomb-sniffing dogs to give some passengers a break from removing their shoes.

"Wow. I mean, wow," said Mike Saresky, who flew into Chicago from Philadelphia, where he breezed through airport security in 12 minutes and got to leave his shoes on. "I thought it was going to be a lot worse."

The extra dogs were concentrated at the nation's largest airports, but they were not used for all screenings, meaning that many travelers still had to observe the usual procedures.

But as the busy summer travel season kicked off, the federal Transportation Security Administration tried to offer travelers some relief after weeks of slow-moving lines blamed on an increase in the number of air travelers and a shortage of TSA security officers.

A TSA spokesman said the extra dogs would remain well beyond the holiday.

At Hartsfield-Jackson International Airport in Atlanta, known as the world's busiest, all 16 security lanes at the main checkpoint were open Friday morning as a bomb-sniffing dog and its handler walked among waiting passengers. Wait times were slashed to less than 15 minutes, compared with backups of nearly an hour seen in recent weeks.

"All the natives were telling me, 'Brace yourself,'" said Carl Pluim, who arrived in Atlanta to fly home to Denver. "I left myself two hours before my flight, so I think I'll be OK."

When she flew barely two weeks ago, LaGretta Watkin recalled that the security lines were "so chaotic" that travelers "could barely move."

"But today it's smooth sailing and refreshing," Watkin said as she started a trip from Atlanta to Jacksonville, Florida. "And I'm loving it."

The TSA began deploying extra canine teams to the busiest airports months ago. While the goal is to shorten waits at larger airports, the reshuffling could result in longer lines at airports that lost dog teams.

The dogs "have the ability to screen large groups of passengers for explosives, making the removal of shoes and laptops and such unnecessary," TSA spokesman Mike England said.

The agency has 900 dog teams nationwide, England said. He declined to say which airports they were sent to for Memorial Day weekend or how long they might stay.

"This is not just for Memorial Day weekend," England said. "I wouldn't expect that it would go away any time soon."

At O'Hare Airport in Chicago, which had some of the worst screening meltdowns in recent weeks, lines moved briskly Friday though they still swelled at times. Typical security procedures appeared to be in place, with passengers removing belts and shoes and taking computers from bags and items out of pockets. Bomb-sniffing dogs were making rounds in pre-security areas.

Terri Hale, arriving in Chicago from Cleveland, said security there seemed, if anything, tighter than usual. Passing through the millimeter-wave scanner, she was stopped and asked to empty her pocket for what turned out to be a tiny piece of foil from a gum wrapper.

"When she found that I was like, OK,'" Hale recalled with a laugh, as a security dog sniffed around her in the O'Hare baggage claim area. "A tiny little piece of foil from my gum!"

Travelers at the San Diego airport said security lines were moving faster Friday than in recent weeks. Adam Hutson noticed improvements as he returned from a two-week trip to Hawaii.

"When we left two weeks ago, it was very slow here," said Hutson, a San Diego business manager who waited over an hour in lines on his way to Hawaii. He said his wait leaving Maui was 30 minutes.

"I think the scrutiny over the last week has really paid off in a big way," said Gary McGoffin of Lafayette, Louisiana, who was traveling through San Diego on vacation with his wife.

Nationwide, AAA said it expected 2.6 million Americans to fly during the holiday weekend. That's out of an anticipated 38 million domestic travelers, most of whom will probably drive to their destinations. AAA predicted 2016 would have the second-highest Memorial Day travel volume on record and the most since 2005.